Written by John Briskham on 09 October 2010. Posted in Match Reports

Wick Academy fans have enjoyed some memorable games over the past 16 years since Cove Rangers were the first Highland League visitors to Harmsworth Park on August 6, 1994. The Aberdeen team came north as league leaders on Saturday and this impressive victory for the Scorries by a convincing three goal margin will be right up there with the best of them.

From the kick off the game was played at a fast tempo with the visitors attacking up the slope and Kevin Webster a real threat on their left especially with set pieces. There was a heart -stopping moment when Danny Milne jumped on the six yard to head a Webster cross and relief when Alan Bokas dashed forward to catch the ball point blank on his chest.

In the 10th minute Gary Weir took a return pass from Sam Mackay after the pair had attacked down the right and fired a left foot shot that smacked against Stuart McKenzie's left hand post.

The Toonsers responded to win a corner on the left for Webster whose inch perfect cross was met by a glancing header from Martin Johnstone which flashed inches past the back post.

It was the Scorrie fans who celebrated in the 16th minute. Bryan McKiddie started a flowing passing move and the ball went on to Craig Shearer and Mackay who set up Weir whose volley hit McKenzie on the foot and looped behind the Cove keeper into the net.

It was soon 1-1 when Bokas leapt to his left to block a drive from Daniel Park and after a scramble near the base of the post Roddy Black stabbed the ball over the line.

Academy immediately won a corner, flighted in by Richard Macadie to Michael Steven whose 6 yard header flicked the top of the crossbar.

Academy soon regained their lead. Mackay chased back to win the ball near the halfway line, surged down the right and cut in along the 18 yard line. Macadie meanwhile was jogging forward and in from the left. Mackay slipped the ball through to him and he calmly steered the ball low into the net.

The Scorries were flying high. After Weir was fouled near the centre circle Stevie Cunningham pumped the free kick high to the penalty spot where McKenzie jumped to catch it. The keeper tried a quick throw, a defender panicked and kicked the ball against Macadie and it fell to Davie Allan. He tapped it back Macadie who fired it against the bar. Then Mackay chipped the ball over the top to Allan who took it to his right before it pulling it back to Macadie who fired it just over the bar.

Cove battled on, Bokas diving to make a great save at the feet of Milne and then catching a Black header on the goal line.

Just before the break Mackay who was clearly in the mood, waltzed past three defenders before being tripped by Stephen Jeffrey who was booked.

In the second half Academy withstood almost incessant Cove pressure, the young back four of Shaun Sinclair, Alan Farquhar, Steven and Cunningham concentrating hard to tackle, cover and make vital interceptions. Efforts from Milne, Johnston, Park and Jordan Heads all went wide and Bokas got down to smother two shots that were on target.

Determined runs up the park by Cunningham, Allan, Weir and Mackay relieved the siege around the midway point. Cove pushed forward again and after a Kevin Stewart shot was deflected for a corner, Steven Tosh shot wide.

Mackay and Weir worked the ball upfield and on to Cunningham inside the box on the left. Unable to line up a shot the youngster pushed the ball to Macadie who from near the spot steered it low to McKenzie's right. As the ball nestled in the corner of the net the Harmsworth Park crowd went wild in jubilation.

There was more to come. After Bokas dived low to his right to hold a downward header from Black, Weir headed the ball away from his marker on the halfway line and raced up the left to win a corner and then a free kick.

After another Cove attack was thwarted by Gary Manson, Cunningham sent a defence splitting pass up ahead of Mackay who ran into the box and swerved an unstoppable drive past McKenzie.

A mixture of scintillating passing and do or die defending had been rewarded with a 4-1 win. 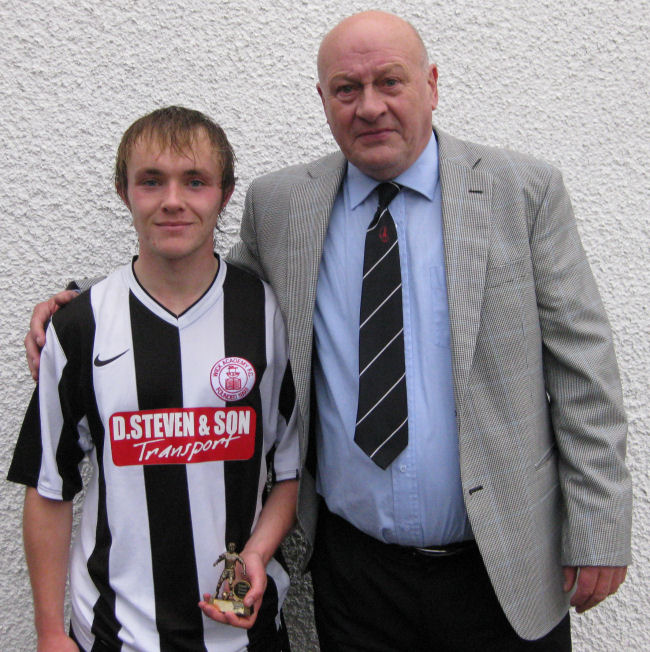