Written by John Briskham on 15 December 2007. Posted in Match Reports

For the second week in succession Forres have scored 6 goals. Academy on the other-hand have leaked 11 in their corresponding games. This one in total had nine goals including a hat-trick for David Calder, a strike from Martin Gunn that must be in the running for goal of the season, 6 bookings, the woodwork being hit twice, and countless other goal-scoring opportunities from both sides.

Forres almost took the lead as early as the 4th minute. Horsburgh found himself with a free header in the middle of the Academy box that hit the base of Williamson's left hand post and rolled back across the line before MacLeod cleared behind for a corner.

Academy's first attempt came just after the quarter hour. Ross managed to get a head-flick to a crossed ball that was deflected just past the post for a corner-kick. The ball was whipped back into the mix and was half-cleared by the Forres defence. McKiddie ran onto the ball from 30 yards out a stuck a whistler that struck the post.

Forres took the lead in 25 minutes. The Scorries defence failed to clear a ball in the box and Whyte got a shot on target that Williamson got down well to palm away, but it fell to Calder and he prodded it home from close-range.

3 minutes later they doubled their advantage. Poor defending again by the Wick defence saw Horsburgh get a flick onto McIntosh and he hammered the ball home giving Williamson no chance.

Academy almost pulled one back in the 33rd minute. Gunn did well up the right wing and crossed for Manson in the middle of the box but his flashing header with keeper Knight beaten skimmed past the outside of the right post.

Forres were awarded a penalty by referee Baxter in the 37th minute. Slack play by Academy gifted possession to Forres and as Duguid ran into the box Alan Sinclair took him down from behind and Baxter point immediately to the spot. Defender Black stepped up to take the kick and he slotted home to Williamson's left.

In the last action of the half Academy again passed up a good chance. Gunn broke through the middle of the Forres defence and ran in one-on-one with keeper Knight, but Knight managed to get something on the ball to deny the Wick captain.

Co-managers Hughes and Munro rang the changes at half-time switching to three at the back, with Weir and Shaun Sinclair coming on for Stuart Sinclair and MacLeod.

This had an immediate impact as within six minutes Weir got on the score-card. Ross crossed to the back post and Weir headed home past an out-stretched Knight.

Three minutes later the Harmsworth crowd were on their feet again as Gunn controlled a long ball from Ross over the top of his head, set himself and shot at target from just outside the box. Knight blocked the ball and it re-bounded back out to Weir who hit it first-time but Knight again made the block, but it fell nicely for Weir to tuck home his second in as many minutes. Game on!!

Shearer almost squared the scores with 50 minutes played. Ross again played the ball over the top of the Forres defence and Shearer tried to chip Knight who was off his line but the attempt went just wide of target.

Forres regained their two goal advantage in the 63rd minute. Slack defending again gave the ball away from which Forres won a free-kick just outside the Academy penalty area. Allan took the free-kick and with his right foot he lifted it over the Academy wall and curled it into the left hand corner of the net.

Forres went nap four minutes later. They broke through the Academy defence who seemed to stop as Alan Sinclair went down injured. Referee Baxter waved play-on and Duguid got a shot on target that Williamson saved but he couldn't hold onto it and Calder was on hand to snap the ball up and score his second of the game with an easy tap-in.

Captain Gunn scored an absolute screamer with 10 minutes of play left. He hit an unstoppable thunder-bolt from 30 yards out that almost burst the back of the net, and with time still left the Harmsworth faithful had a life-line that something could still be salvaged from the game.

Unfortunately it wasn't to be as Calder sealed the game with his hat-trick. Slack defending was again the Academy downfall as they failed to deal with the Forres build-up and eventual cross into the box. Williamson seemed to get something on the ball as it was fired on target, but it fell to Calder and he managed to squeeze it between the young keeper and his left hand post.

Academy manage to retain their 10th place in the league, but Brora are now breathing down our necks after their win against Fort William. Academy must try to tighten up in defence with an away trip to Lossiemouth next weekend, and a hard game then to follow at home to Deveronvale on the 29th. 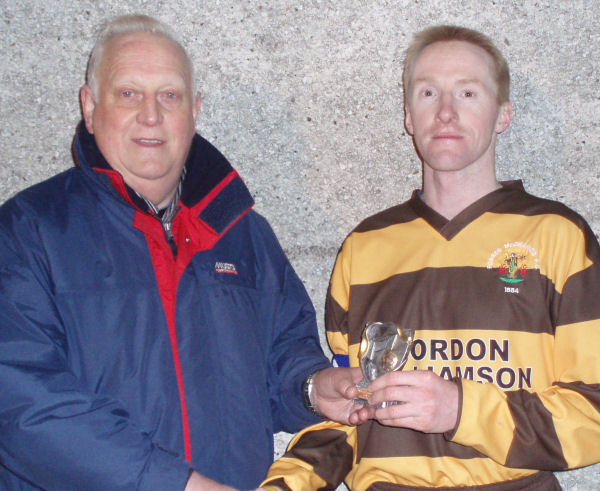