Written by John Briskham on 14 December 2007. Posted in Club News

Wick Academy were delighted to welcome a group of players from East End's U11 squad and their coaches for the visit of Huntly. Before the game the youngsters took part in a training session supervised by Wick Academy's co-manager Ian Munro and committee member Alan Farquhar. Despite the cold weather the youngsters red cheeks suggested they had been working hard and they all seemed to enjoy the experience. Before leaving the pitch they had a few penalty kicks against Academy keeper James More himself an East End coach when his Academy commitments allow. They then retired into the changing rooms and listened into Richard Hughes pre-match talk before Jamie Howden joined the players for the toss of the coin as mascot.

The youngsters were not done for the day as they then undertook the task of ball boys for the match, probably the first time Academy have had Ball boys in recent times at least. The boys can be seen in the photo wearing the black jackets funded by a generous donation from the Liam Henderson Memorial Fund. Academy have already had visits from Thurso Swifts and Canisbay and look forward to seeing players from the other youth teams before the season ends

The boys are pictured below 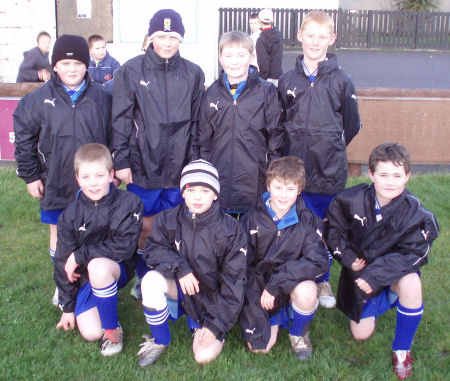