Written by John Briskham on 29 July 2006. Posted in Match Reports

Sorry for the late publishing of this report. I missed the game due to illness, and this is my first day back on the keyboard. So now onto the good bit:-

Academy had the perfect first-half scoring three un-answered goals. A header by Andrew MacLeod, Free-kick by Gary Farquhar and close range slot home by Craig Shearer see Academy go in at half-time with a healthy lead.

Clach score within 6 minutes of the re-start with an Alex Bone strike. They then get a second 9 minutes from time from Andrew Neill, but Academy hold on and go into the UMAX NOS Cup Quarter final. That game will be played against Ross County at Victoria Park Dingwall, the date of which is still to be finalised.

Only once before since joining the Highland League have Academy won their opening competitive match of the season. That was in season 20001 when we beat Cove 1 - 0 at home in the league. With that in mind, and the fact that Clach often seems to be a team that we have slip-up against in the past, that makes this an even greater result, and one that I really was sick I didn’t manage to get to see.
Sponsors Man of the match Gary Weir
Seen here receiving his award from Rob Murray, Match sponsor ITP Solutions 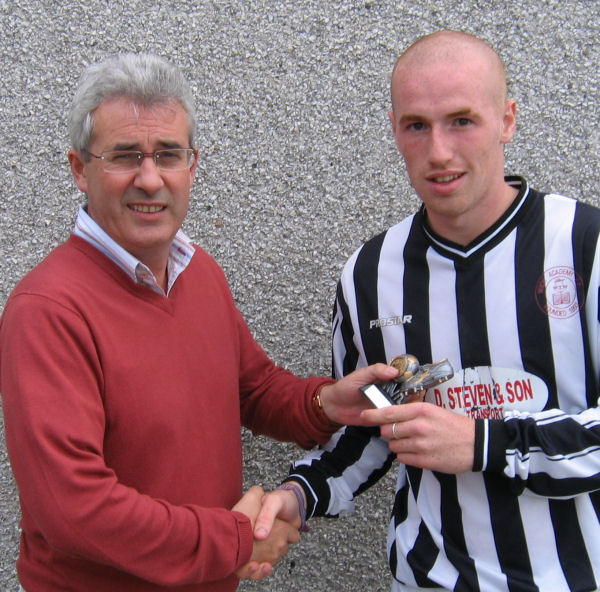 Written by John Briskham on 22 July 2006. Posted in Match Reports

A hard working Orkney side gave Academy another good work-out this afternoon as part of their continuing pre-season preparation. Both Gary Farquhar and Richard Macadie picked up minor injuries in Thursday nights game against Ross Country so they sat this one out, allowing manager Budge to give another few youngsters a run-out.

Academy had the first scoring chance of the game within 8 minutes. Stuart Sinclair played a good ball into the box which Shane Sutherland took first time, but he turned his shot wide of the Orkney keeper Leonards left hand post.

Then in 13 minutes with Academy continuing to press the Orkney defence Gary Weir played a pass through to Craig Shearer on the edge of the box. Craig attempted a curling shot into the right hand corner of the net, but Leonard managed to get across the face of his goal quickly enough to make the save.

Orkneys first real attempt came in the 17th minute when Adam Stranger managed to out-jump the Academy defence and got his head to a good crossed ball. His header however went just over the top of Bells cross-bar.

Academy continued to try to break down a tough Orkney defence and in 20 minutes David Cowie hit a powerful cross ball into the heart of the Orkney box which Gary Weir just failed to connect with from only about 5 yards out.

Academy eventually broke the dead-lock in the 32nd minute. A bit of a mix-up in the Orkney defence saw keeper Leonard picking up a pass-back, and a free-kick inside the box was awarded by referee Sinclair. Gary Weir laid the free kick to the side and Gary Manson stuck a good shot that Leonard parried out. The ball fell to Shane Sutherland and he slotted home.

The second half re-started with good chances for both sides. Within a minute Davie Cowie managed to beat the off-side trap and got one-on-one with keeper Leonard, but Leonard managed to save Davies shot low down with his feet.

Orkney went straight back up the park and John Deerness, who came on as a sub at half time, had a good shot that Bell managed to save low down at his Right hand post.

That was the start of a good 10 minute spell for Orkney, who came even closer in the 52nd minute to levelling the score. Brian Garson fired in a dangerous cross ball which another half-time substitute Neil MacDonald fired against the post. Bell collected the ball as it span back out and across his line.

Orkney continued to press and in the 61st minute Deerness flicked the ball over the head of keeper Bell, but fortunately David Mowat was on hand to make a goal-line clearance.

In 76 minutes John Farquhar, who was showing good turn of pace up the wing, played in Academy substitute Martin Bain, but unfortunately Martin’s shot was too close to keeper Leonard who made a comfortable save.

3 minutes later young substitute Bryan McKiddie had a good run up the right wing and he crossed the ball in for Graeme Reid to take it on the volly for a great attempt at goal, but keeper Leonard made a great diving save.

The game fizzled out with a further series of substitutions, and the unusual occurrence of both teams putting players back on that had already been substituted. As it was a friendly both managers agreed that this could take place, so back on came Sinclair for Orkney and Weir for Academy for the last few minutes of the game.

So another good work-out for Academy, and another opportunity for Peter to give a few of the younger members of the squad a run-out. This sort of game is exactly what Academy need as part of their pre-season build-up and they move on now with their last planned friendly away to Ballintore on Tuesday night the 25th.

Written by John Briskham on 21 July 2006. Posted in Match Reports

Both sides played at pace with good midfield passing and movement, but the first half past without any real goal scoring opportunities

The best Academy chance came in the 32nd minute when Davie Cowie released Richard Macadie through the centre of the County defence. Richard played in Gary Weir who went one-on-one with the keeper, but Ridgers saved Garys shot low down to his right.

Counties best attempt of the half came in the 36th minute when Robertson sent a 32 yard drive just past Daniel Bells left hand post.

The second half continued in the same vein with both side playing attractive football. County had the first chance of the second half in 53 mins when McSwegan had a 25 yard shot at goal but Bell got down to it really well and turned it round his post for a corner kick.

The first goal of the game came in the 55th minute. Richard Macadie drove at the County defence with a good penetrating run before passing to Martin Bain. Martin forced his way past a couple of County defenders getting a good break of the ball off the legs of one of them, before slotting the ball low under Ridgers for a well taken goal.

Country were not long though in replying, and within 3 minutes they found themselves back on level terms. Referee Hamill blew for a penalty kick as Academy defended an County attack after a County player went down in the box after what looked to be contact from Alex Lamb.

Shaun Fraser stepped up and sent Bell the wrong way, and drove the ball right into the centre of the Academy goal to level the game.

The only real remaining chance of the game came in the 72nd minute when Bell made a terrific diving save to deny Hugh Robertson from a 30 yard free kick attempt that looked goal-bound all the way.

So a fairly large crowd were entertained with a good game, played at pace by both sides, and a draw was probably a fair result. This was a well organised County side, who worked hard, closed the ball down well, and gave Academy a very good pre-season work-out.

From an Academy perspective the players looked fit, in particular Richard Macadie appeared as if he could have run all night long. The defence looked pretty well organised and they played as a good unit from the back right through the midfield to attack. There were a few misplaced passes, but the players were attempting to play the ball at every opportunity, and they all looked eager to get involved in the play. Daniel Bell also looks to be a very accomplished young keeper. He looked confident, has a very long kick-out, and had one save in particular tonight that denied County the win.

Academy now continue their build-up to the new season with another home game against Orkney this Saturday the 22nd, followed by a trip away to Ballintore on Tuesday the 25th

Written by John Briskham on 05 July 2006. Posted in Match Reports

A few pre season friendlies have now been arranged, details as follows:-

Written by John Briskham on 15 August 2005. Posted in Match Reports