Written by Alistair Ross on 19 September 2010. Posted in Match Reports

Wick Academy went into this match hoping to bounce back from the disappointment of last weeks North of Scotland Cup defeat to Forres Mechanics. Huntly came to the Harmsworth Park looking to build on the solid start made by newly re-appointed manager Steve Paterson to the Black and Golds.

Wick made three changes to the team that lost out to Forres with Martin Gunn, Sam Mackay and Alex Lamb being replaced by Bryan McKiddie, Shane Sutherland and Andrew MacLeod respectively. Only Alex Lamb made the bench for the home team with Stevie Cunningham returning from his break as an unused sub.

Former Scorrie Grant Campbell turned out for the visitors having recently signed as a free-agent after leaving Wick by mutual consent and it was through him that Huntly continually looked dangerous.

After this game though, the management duo of Munro and Hughes must be wondering what they have to do to get the normally free-flowing Scorries returning to form. For the fifth week running, Academy failed to start the game and, unlike previous weeks, they failed to find the spark necessary to ignite the second half in this one too.

The game started with Wick looking to play a 4-4-2 with David Allen and Gary Weir up front and initially looked to be working. However, the pressure exerted by Huntly seemed to upset that and the team settled into a 4-5-1 formation as they tried to counter a fast attacking Huntly side.
It was Huntly who made the breakthrough on 22 minutes with former Scorrie Grant Campbell hitting the bye-line and his cross was met by Colin Robertson at the back post who nodded past keeper More, playing his game of the calendar year due to personal commitments, to open the scoring.
Wick continued to try to play football and were rewarded when David Allen was brought down in the box on 33 minutes for a penalty that Gary Weir coolly slotted past keeper Campbell to score his 2nd penalty in two weeks.
However, Wick were undone again by the pace of Huntly as scorer Robertson’s cross was calmly converted by Myles Brownhill within 2 minutes of the re-start.
After the break, Wick were lucky not to concede further and keeper More was the busiest man on the pitch saving an onslaught from the visitors that included efforts from Campbell, McGinlay and Bruce.
Wick brought on Ross Allan, Davie Cowie and Michael Steven for Gary Weir, Shane Sutherland and Andrew MacLeod but could not find any rhythm or flow in the match. Richard Macadie had a last minute free kick that proved a comfortable save for keeper Campbell and to be honest, a draw would have flattered a Wick side struggling to return to the highs of the last two seasons.
Man of the Match was awarded to defender Alan Farquhar by sponsor G & A Barnie, presented by Kevan Anderson. 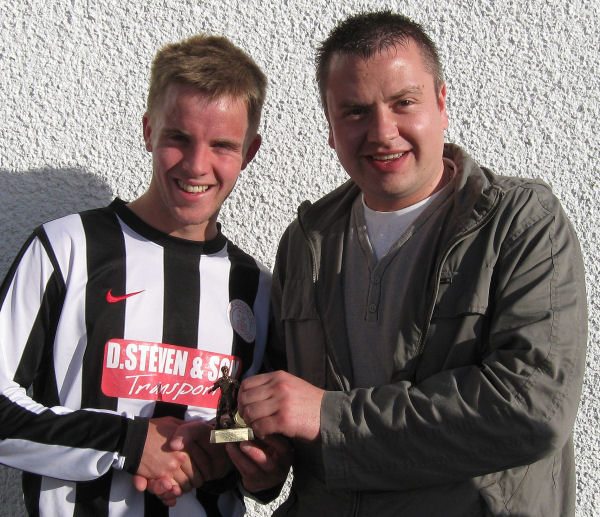