Written by John Briskham on 04 September 2010. Posted in Match Reports

Academy fought back from 2 goals down today to beat Lossiemouth 3-2 in a remarkable second half turn-around. A Jamie Bagley double had the Coasters well in control going in at half time, with Academy having a relatively poor first half. Changes of personnel at half-time seemed to kick the Scorries into gear and when David Allan got ahead of his marker to head home a Sam Mackay cross with 63 minutes played it was game on. Gary Weir squared the scores 3 minutes later and Richard Macadie secured the points with a well drilled shot into the bottom right hand corner of the net with 10 minutes of time left.

Academy were slow getting out of the blocks today and Lossieouth on the other hand seemed to be the first to every ball.

The visitors took the lead in the 5th minute. Tony Ross fed Stuart Strathdee down the right wing and he got round Andrew MacLeod to whip the ball across goal for Jamie Bagley to slot home at the back post.

8 minutes later Lossie were in on goal again. Andrew MacLeod missed a clearance and Stuart Strathdee homed in on goal but More came to meet him and blocked his shot with his feet.

It took 17 minutes for Academy to get their first shot on goal. Sam Mackay passed the ball into David Allan and he stripped Sam Milton for pace but struck his shot straight to keeper McConnachie.

Allan turned provider in Academy's next attack as he squared the ball to Martin Gunn but Gunn's shot went just wide of the left hand post.

Lossie were having the better of the first half and Academy just couldn't seem to break through them as they defended in a 4-4-2 formation. Indeed the visitor went two up in the 34th minute. Lossie play-maker Shawn Scott split the Academy defence with a piercing pass and Jamie Bagley ran through with the ball and fired home under More's body from 14 yards out.

Academy made two changes for the start of the second half. Alex Lamb came on for Andrew MacLeod and Gary Weir for David Cowie.

With 63 minutes played Academy got right back into the game. Mackay drove down the right flank and crossed into the Lossie box right onto the head of David Allan who got there just in front of his defender and steered his header into the net for his 3rd goal in 3 games.

The goal gave Academy a real lift and 3 minutes later they squared the game. With a period of good pressure they pinned Lossie back into their own half and when a Martin Gunn shot took a flick off a defender in the Lossie box the ball fell in open space and Gary Weir pounced on it and steered his shot past the right hand of keeper McConnachie to square the scores.

Academy now had their tails up and you you see the beleif coursing through the team that this was a game they could now go on and win.

David Allan had an attempt to chip the keeper in the 73rd minute, but the winner came with ten minutes of time left. In a frenetic spell of play a Sam Mackay shot was cleared off the Lossie goal-line. The visitors broke back up-field and Stuart Strathdee looked as if he was going to bag his hat-trick as he managed to get a powerful shot on target that More did well to save. Straight back down the park however Mackay drove down the flank and he crossed to the feet of David Allan. He pushed the ball into the path of Richard Macadie and he drilled a right foot shot into the bottom right hand corner of the net from the edge of the penalty box.

Lossiemouth battled to the end and although they got themselves into a few more good goal scoring positions they didn't really capitalise on them and Academy saw out the clock.

This remarkable second half turn-around sees Academy keep a 3 for 3 unbeaten home league run, and it's Lossiemouth's first loss of the season. The result is just the tonic the boys needed to take them into next weekend's Cup final. Get yourself to Dudgeon Park Brora next Saturday as it's going to be a massive day out for the club and the players would appreciate your support. 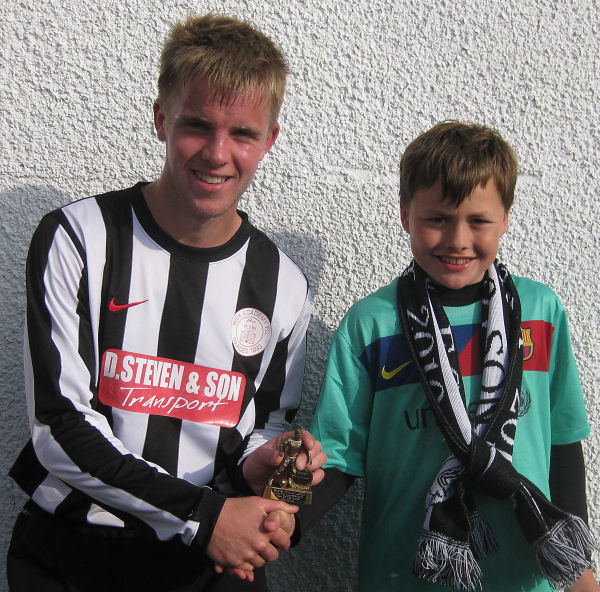