Written by John Briskham on 24 August 2010. Posted in Match Reports

A bumper crowd packed the Harmsworth Park tonight to witness the Scorries blast aside the young Caley Thistle starlets to reach their first ever senior cup final.

Caley took the lead against the run of play in the 10th minute when ex-Academy striker Shane Sutherland dipped his shoulder inside the Academy penalty box, found half a yard to the side of Alan Farquhar and fired a rasping right foot shot into the back of the net.

Academy kept playing their football though and levelled the scores in 23 minutes when Shaun Sinclair fired a cross into the Caley box from the right wing and Craig Shearer rose above the Caley defence and directed his header into the bottom corner of Johnson's net.

The teams went in square at half time and Shane Sutherland had a great chance to score his second a minute after the re-start but he sent a free header wide of target.

Sam Mackay had the Harmsworth crowd on their feet on the 56th minute when he chased down a long ball with keeper Johnson. The keeper seemed to get to the ball first at the edge of the Caley penalty box  but he kicked it off Mackay's legs. The ball looped up into the air and Mackay followed in and slotted home into an empty net.

More joy was to come about 20 minutes from full time.  Manson pumped a free kick into the Caley box. Weir managed to get something on it and it bounced back off the keeper but Shearer was the quickest to react and stuck a leg out to hit the ball up into the air and it seemed to hit off the under-side of the cross bar before rolling into the back of the net.

A tense last 15 minutes saw the crowd count down every second . Caley did find the net again before full-time but it was chalked off for off-side, and when referee Ross blew for full time the Harmsworth roar could probably have been heard over most of Wick as the Academy faithful started to celebrate.

Academy now face Forres Mechanics who beat Nairn County 1 - 0 in the other semi-final tonight. That game will take place on Saturday the 11th of September in Dudgeon Park Brora, so start making your travel plans for the clubs first cup final. 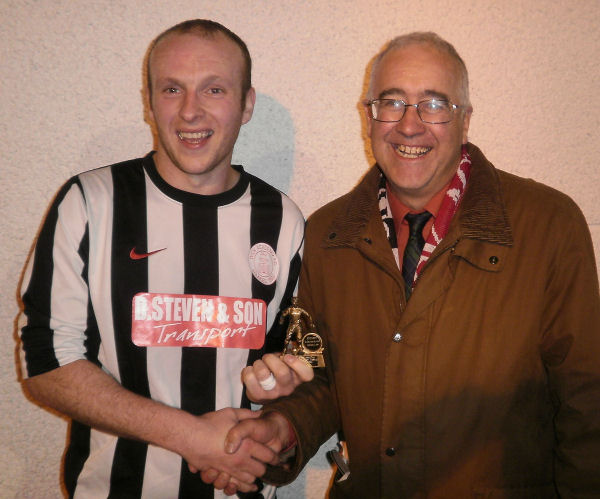