Written by John Briskham on 28 July 2010. Posted in Match Reports

Academy opened their season tonight with a comprehensive 5-2 win over local rivals Brora in the first round of the Highlands and Islands Training Services North of Scotland Cup. Wick shone through despite a 10 minute floodlight failure half way through the game.

It only took 5 minutes for the Scorries to open the scoring. Stevie Cunningham supplied a flicked pass for David Allan and he marched into the box and he drove a low shot past keeper Martin onto the back of the net.

Sam Mackay almost doubled the lead 2 minutes . David Allan stormed up the wing and play Mackay onto the box. He went one-on-one with the keep but hit his shot straight at the young goalie.

Macadie was next to have a run at the Brora back line hitting the by-line and whipping a great pass into the box.  David Allan slipped his defender but couldn't get enough on his header to threaten the goal.

With just over a quarter hour played Mark Smith delivered a dangerous cross into the Academy box but Bokas came and plucked the ball off the head of Daniel Mackay.

in 38 minutes Academy doubled their lead. Sam Mackay pushed up-field and slid the ball to David Allan and he netted his second of the game lashing the ball past a helpless Martin.

A minute later Allan and Mackay combined again. This time Allan squared  the ball across goal with his speed leaving the Brora defence at sixes and sevens and Mackay slotted home past an outstretched Martin in the Brora goal.

Brora started the second half with a bit more vigour and 4 minute in Gary Farquhar has a good shot that Bokas palmed away.

4 minutes later Farquhar tried his hand again when he got onto the end of a punch-out clearance from Bokas but he couldn't keep his attempt down and it went over the cross bar.

in the 55th minute the floodlights went out. Fortunately it was still light enough for the game to continue, and Brora pulled a goal straight back. Ronnie Jones cut in from the right and curled an 18 yard shot past Bokas into the corner of his net.

Academy were awarded a penalty straight from the re-start. David Allan burst into the Brora box with the ball at his feet. Sean Munro slid in and looked to have won the ball, but referee Baxter pointed to the spot. Mackay took the spot kick but Martin made a good stop diving to his left to block the ball.

Gary Weir came on for David Allan with 70 minutes played and he got his name on the score sheet within 3 minutes of his arrival. Mackay played the ball up the line for Macadie who whipped a low curling cross into the box. It evaded the Brora defence and Weir stormed in at the back post and slammed home.

Nigel MacKenzie had two good attempts blocked by Bokas before Academy scored the best goal of the game.  Gary Manson played a neat one-two with Mackay which won him a yard of space and he smacked a right foot shot off his lacers from 25 yards out that flew into the top corner of the net.

Brora managed to pull another back with 4 minutes of play left. Bokas came and flapped at a corner ball. It fell to substitute Scott McKain and his shot managed to find the net after it looked to have taken a slight flick off an Academy player in the box. 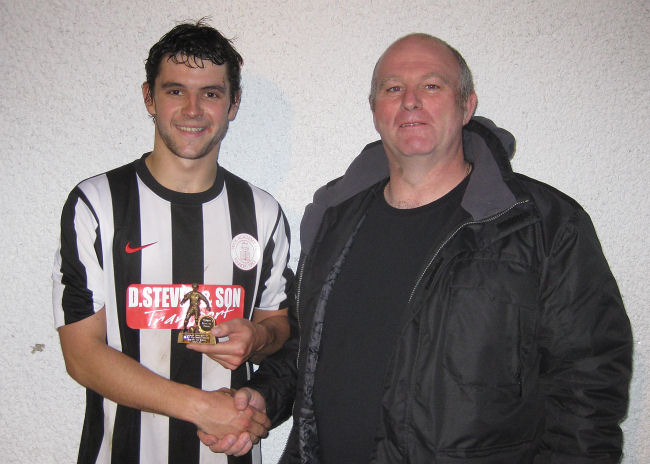