Written by John Briskham on 01 May 2010. Posted in Match Reports

Buckie's players celebrated with their 250 travelling fans after clinching the Highland League title but the game itself was poor, certainly not worthy of the occasion.

The visitors were clearly hungry for success and moved the ball around quickly from the start.

In the 5th minute a lob from the Buckie right by Hamish Munro to the back post was cleared for a corner from which Robbie Brown's powerful downward header was kicked away near the post by Gary Manson.

Academy did string a few passes together in midfield but it was slow motion stuff with the Jags getting plenty of defenders back to prevent the ball reaching the penalty area. In the 10th minute David Allan made a 40 yard solo dash up to the left but could not get past Chris Angus who put the ball out for a throw in.

This led to another spell of possession for the Scorries but despite low probing forward passes from Manson and Gary weir there seemed little prospect of penetrating the Thistle rearguard.

Buckie attacked down their left in the 14th minute and when the ball came over to Martin Charlesworth his drive was deflected for a corner. Academy cleared their lines but were caught flatfooted when Brown sent it back down the Buckie right into the path of Charlesworth. The striker stumbled as he approached the 18 yard line but regained his footing to calmly lob the ball over the head of advancing keeper Alan Bokas to nestle in the net.

Buckie veteran Stephen Bruce was the next to set up a chance for Charlesworth but this time Stewart Ross saved the day with a sliding tackle 8 yards from goal.

In the 20th minute at last reached the Buckie box, Richard Macadie winning a corner on the right. The first attempt on goal followed when Craig Shearer hooked the ball over the bar from 20 yards.

Bruce sliced a shot wide but Buckie soon launched another raid down their left was halted by a foul 40 yards out. As Mike MacDonald chipped the ball towards the goalmouth, Manson and Buckie forward Graeme Stewart were jockeying for positon at the far corner of the box. Stewart fell theatrically to the ground and much to the anger of the Wick dugout and nearby spectators referee Graham Beaton awarded a spot kick. David MacRae hammered the ball into the middle of the net and now two goals up Buckie were in cruise control.

In the 31st minute after Alec Lamb was booked for a foul near the halfway line, the free kick from Angus sailed through into the arms of Bokas.

Wick rallied though when Sam Mackay raced forward and slipped the ball to the feet of Weir there were six green and white shirted defenders around the Wick striker. A high cross from the right by Ross deceived Thistle keeper Kevin Main but Academy had nobody out left to take advantage. Five minutes before the break Manson worked the ball up the left with Macadie whose chip to the far post was headed wide by Mackay.

Five minutes into the second half Mackay broke the visitors' defensive stranglehold to race clear up the left. There were strong claims for a penalty when he was tripped at the front corner of the area but Mr Beaton decided that the first contact had been on the 18 yard line. Mackay steered the free kick low towards Weir who was penalised when he tried to stab it away from Hamish Munro's foot.

At the top end Bruce ran in from the left to wriggle his way into the box but from a tight angle shot wide of the near post.

The home supporters were showing their annoyance that every Wick challenge seemed to be penalised and were particularly irate at a free kick awarded when Weir kicked the ball at knee height and Buckie player stooped to try to head it. Skipper Martin Gunn was booked for his comments on this incident but worse was to follow when Lamb's next tackle was judged a foul and a second yellow card saw him get his marching orders. As players from both sides jostled for position the Wick area awaiting the free kick, the referee spotted a push by Shaun Sinclair and showed him the red card.

With Academy facing the last 35 minutes with just nine men the game was now over as a contest. The final nail in the coffin came with a cross from the left and a nod on from Bruce which set up an easy two yard tap in for Charlesworth at the back post.

Buckie's Donnie Munro was booked for a crude challenge on Allan but by now the game was very flat, the champions-to-be passing the ball across midfield to the hurrahs of their jubilant fans, packed in and around the South Stand.

Stevie Cunningham produced a brief moment of excitement when he ran clear on the right and sent the ball low across to Macadie whose 15 yard shot was saved by Main.

The final whistle sparked a good-natured pitch invasion by the Buckie fans who started their celebrations in earnest providing good footage for the television cameras and a boisterous backdrop for the radio interviews. 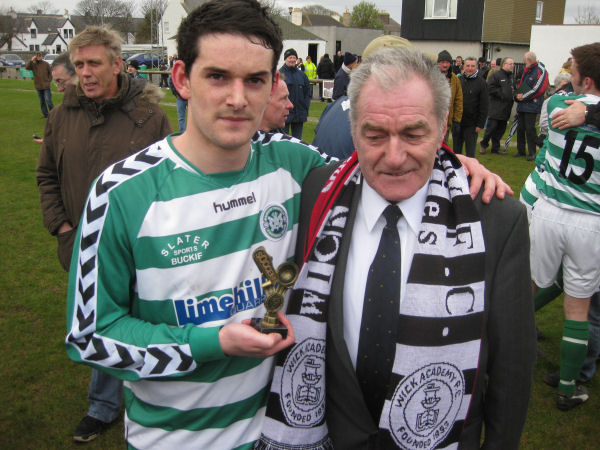