Written by John Briskham on 18 April 2010. Posted in Match Reports

Wick Academy entertained the current league champions Cove Rangers today at the Harmsworth Park and Cove keep themselves in the title race with a 2 goal to 0 win. Kevin Webster scored his 17th and 18th goals of the season with two well taken free kicks.

Wick started the game playing up the Harmsworth slope and within the first minute Weir bullied his way into the box but under pressure from Neil Cruickshank he couldn't get his shot on target.

A minute later Sam Mackay lashed a free kick into the Cove box and the Academy players shouted for a hand ball but referee Fraser waved them away. The ball then fell at the feet of to David Allan but keeper Windrum smothered the danger.

It took 10 minutes before Cove threatened the Wick goal when Calum Watson found some room and from 20 yards out fired a dangerous dipping shot just over top of the Academy cross-bar.

In the 26th minute Cove almost capitalised on some slack Academy defending. Academy tried to play the ball out of defence but Cove hounded it down and Gunn was forced into a back-pass to More. More sent his attempted kick-out spinning up into the air and Barrie Stephen got his head to it but couldn't get his effort on target.

Just before the half hour Academy had their best chance of the half. Cunningham cut in from the left wing and fired a cross across goal that Macadie hit first time from 5 yards out but keeper Windrum got a foot to it for a great goal saving block.

Cove had a good spell 10 minutes before half time and forced More into a great double save. First he got finger tips to Kevin Webster chipped attempt. The ball fell to Danny Milne and on the ground More managed to block his follow-up attempt.

Minutes later Martin Johnston had a shot on target that beat More but Shearer managed to scramble across the goal line and hook the ball clear for a corner kick.

So with neither team managed to get their name on the score-sheet and referee Fraser blew for half time.

Straight from the re-start Stevie Cunningham threaded a ball out to Richard Macadie who drove at the Cove defence before cutting in from the right and he fired a shot that flew just wide of the Cove back post.

Just before the hour mark Jordan Heads stung the palms of More's hands as More palmed away his shot and Grant Campbell then hooked the ball out of the penalty area for a corner.

More was by far the busiest of the two keepers by this stage and was called into action again in the 69th minute making a good block with his body to deny Kevin Webster another goal.

Cove put the points in the bag in the 77th minute. They were awarded what looked like a soft free kick on the right hand side of the field just outside the Academy penalty area and Kevin Webster again stepped up and executed a carbon-copy of his first goal. Murray McCulloch again got on the end of the Academy wall and managed to squeeze a chink of light at the end of it for Webster who curled the ball into the net. More did seem to get a hand to the ball but it wasn't enough to keep it out.

Academy looked jaded with perhaps two games in as many days taking it's toll. They had one half-chance to pull a goal back 10 minutes before full-time when Shearer volleyed an attempt just high of the target, but in truth Cove controlled the final period of play to the full time whistle.

Cove's Kevin Webster was awarded the sponsors man of the match. 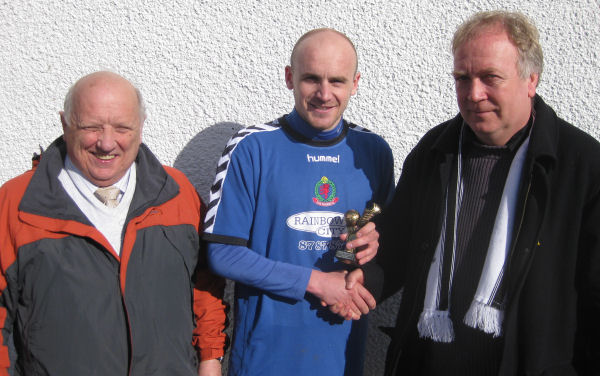