Written by John Briskham on 16 April 2010. Posted in Match Reports

Visitors Lossiemouth earned a point at the Harmsworth Park tonight drawing 2-2 with Academy. Nikkie Smith opened the scoring for Lossimouth in the 28th minute, but second half substitute Gary Weir leveled the scores 10 minutes into the second half. Sam Mackay fired the Scorries in front with a speculative crossed ball which keeper Masterton got finger-tips to but the ball flew into the top left hand corner of his goal. Lossie kept plugging away and with 3 minutes left Martin McMullan fired home from the edge of the box to earn the Coasters a point.

The first 25 minutes of the game were pretty much non-event with neither side managing to launch a serious attempt on goal.

The first highlight of the half came when Sam Mackay had a great run up the left wing. He showed fantastic ball control skipping past four Lossiemouth challenges before squaring the ball across goal but there was no-one there to get on the end of it.

The Coasters opened the scoring on the 28th minute. Nikki Smith latched onto a though ball beating the off-side trap. Bokas hesitated before coming to meet him and Smith spun around him and rolled the ball into the empty net.

Academy had a chance to level the scores in the 35th minute. Richard Macadie fired a cross into the back post where Craig Shearer was unmarked and he cushioned a header back across goal but again there was no-one about to take advantage of it.

A minute later Nikki Smith again got in on goal and managed to get a shot on target that went straight to Bokas. He collected the ball but spilled it in the process but managed to recover before Smith closed him down.

Academy then conceded a cheep free-kick right on the edge of the penalty box. Gary Manson chested down a high ball but the ball rolled off his arm. Lossie shouted for a spot kick and it looked a close call but referee Frew waved the protests away and gave the free-kick instead. John Urquhart tried to curl it towards goal with his left foot but he hammered it into the wall and the danger was cleared.

Lossie had the best possession and control of the first half but Academy had a good five minute spell just before the break. Macadie was inches away from latching onto a crossed ball in the Lossimouth box. The next chance fell to Craig Shearer. A corner was floated into the box and Andrew Macleod headed it down to the feet of Craig Shearer four yards out from goal. He hesitated with the ball at his feet and Sam Milton got a foot in and cleared the danger.

Academy's best chance of the half came in the final action before the break. Gunn sent Grant Campbell up the right wing and he crossed into the box. Shearer got his head to it and nodded down to David Allan who turned and riffled a shot on target that keeper Masterton got fingers to and tipped over the cross-bar.

Both sides made a change for the start of the second half. Gary Weir came on for Stevie Cunningham, and Anthony Ross for Colin Masterton.

Academy looked a lot sharper in the second period and within minutes of the re-start Weir got straight into the action holding up the ball before feeding to Sam Mackay but he fired his attempt high of the target from the edge of the box.

10 minutes in though the Scorries leveled the scores. Gary Manson slid the ball through the middle of the Lossiemouth defense to the feet of Weir. He managed to spin and find an inch of space within the box and curled a right foot shot around Masterton into the corner of the net.

The goal lifted the Scorries and they threatened again minutes later. A Manson free kick bounced about the Lossie box before Weir managed to head it towards goal and it was cleared off the line. The ball was sent back in but took a flick off Sam Milton for a corner. Macadie delivered the corner and Weir got a free header but put his attempt over the top of the cross-bar.

In the next action Lossimouth broke up-field and Daniel Smith got a shot on target. Bokas managed to collect, but looked a bit nervous as the ball bounced off his chest.

With 68 minutes on the clock Academy took the lead. David Allan and Gary Weir combined up the right wing before Weir crossed into the box looking for the head of Shearer. John Urquhart cleared the danger but the ball came back out and fell to Sam Mackay. He collected it and ran forward a few steps and 30 yards out sent a speculative cross to the back post which Masterton scrambled across his goal to and although the keeper managed to get a hand to the ball it flow into the top corner.

1 - 2
In the 72nd minute Lossiemouth came very close to scoring again. Martin McMullen got his head to a corner and his attempt smashed back off the cross bar and was cleared for a corner.

Weir then had a chance to seal the points for the Scorries. David Allan skipped over a few tackles and drove down the right wing. He sent his cross into the Lossiemouth box and it was cleared in a bit of a stramash. It fell for Weir who marched into the box. Keeper Masterton came out to meet him and Weir dinked it over him but put too much gas on it and it went over the top of the target.

It was all action for the final minutes and Stuart Strathdee was next to threaten for the visitors when he got a foot to a Lossie corner but his attempt went just round the foot of the post.

7 minutes from time Grant Campbell sent David Allan into the box and he managed to get a shot on target but Masterton got down well and smothered the ball.

3 minutes from the full-time whistle Lossiemouth grabbed the equalizer. John Urquhart floated a free kick to the Academy back post. The ball was half-cleared and fell to Stuart Strathdee who knocked it back into the Academy box where Martin McMullen drilled it through a packed penalty box and into the net

With not enough time for an Academy response referee Frew blew for full time.

The Academy players now have Saturday off before facing current league champions Cove Rangers with a 3 pm kick-off on Sunday. 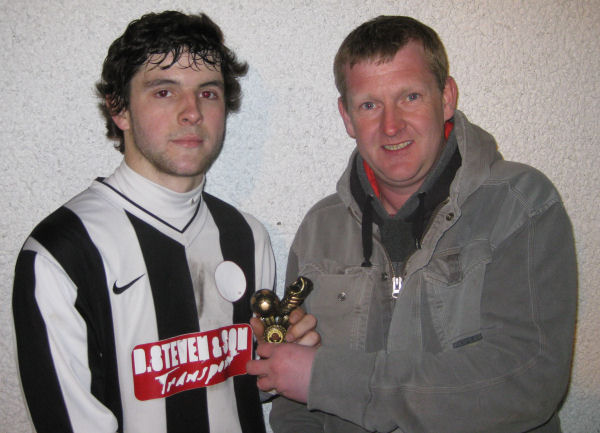