Written by John Briskham on 27 March 2010. Posted in Match Reports

Academy never really got into their stride as they suffered a disappointing 3-0 defeat to Fraserburgh at Harmsworth Park, although the final score perhaps flattered the high-flying visitors.

Robert Morrice did most of the damage with a second-half double as Charlie Duncan's men extended their unbeaten league run to 14 games and gained revenge for Academy's 4-1 win at Bellslea in November.

Both keepers were tested early on, Fraserburgh's Paul Leask pushing away a volley from Martin Gunn before a hooked effort by Allan Hale was tipped past by Wick No. 1 Alan Bokas.

Fraserburgh's Bryan Hay then side-footed the ball over the bar from close range after getting on the end of a Steven Main free kick.

The visitors took the lead after 20 minutes with a route-one goal. Leask's long clearance deceived Academy defender Andrew Macleod and Hale was on to it in a flash, drilling the ball past Bokas into the bottom corner of the net.

Academy pair Stevie Cunningham and David Cowie had decent long-range efforts saved by Leask either side of half-time, and midway through the second period Stewart Ross saw a powerful free kick clatter down off the underside of the bar.

Fraserburgh doubled their lead after 71 minutes when Graham Johnston delivered a high ball over the Academy defence and Morrice clipped it first-time past Bokas.

Morrice produced another clinical finish after 84 minutes to wrap up the points, slipping the ball into the net after being released by Jonathan Garden.

There were bookings for Broch duo Marc Dickson and Graham Johnston.

The result keeps Fraserburgh third in the table, four points behind second-placed Buckie Thistle, while Academy drop to eighth as a consequence of Inverurie's victory over Huntly. 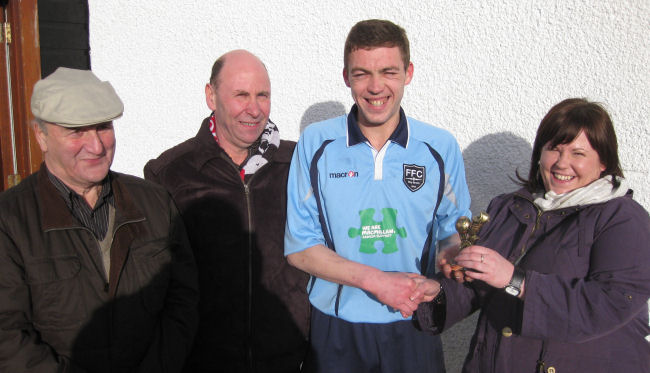