Written by John Briskham on 17 March 2010. Posted in Match Reports

Academy took their league goal count to 60 tonight, their highest ever scoring total since joining the league, with a convincing 5 - 2 win over Clachnacuddin. Sam Mackay opened the scoring and Richard Macadie doubled the Scorrie's lead before Gordie Morrison pulled a goal back for Clach with a scorcher of a free-kick. Macadie bagged his second and Allan also chipped in before substitute Cunningham put the game beyond doubt. Colin Williamson did pull a goal back for the visitors 5 minutes from time, but it was too little too late.

Academy opened the scoring with their first real attack of the game on the quarter hour mark. A corner was swung in by Macadie. Clach headed clear and it fell to Weir but his shot was blocked. The ball came back to Weir and he slid it to Mackay and he made no mistake leathering the ball on the volley past a rooted Kinnaird.

Kinnaird did well 4 minutes later to stop the Scorries increasing their lead even further. Weir slipped the ball forward onto the feet of David Allan who drove into the box but Kinnaird blocked his shot.

In the 21st minute Academy doubled their lead. Weir picked the ball up in the middle of the park and he slotted it through the heart of the Clach defence to Macadie. He outpaced the retreating Clach back-line and confidently clipped it over the top of the out-rushing Kinnaird into the back of the net.

4 minutes later Macadie provided the through ball for Mackay and Kinnaird did well again to block his attempt. The ball was humped back up-field and Colin Williamson got onto the end of it but he sat back on his shot and screamed it over the top of the Academy cross-bar.

Just before the half hour Macadie showed great skill as he skipped through 4 tackles at the edge of the Clach box but he just couldn't get a shot off and the ball was cleared.

Kinnaird was the busiest of the keepers by far and was called into action again as Mackay drove wide before cutting the ball back to David Allan who fired a first tome right foot shot on target but Kinnaird did well to tip it round his post for a corner.

In the next action Bokas thumped a kick high up-field which bounced through the middle of the Clach defence. David Allan latched onto it and took the ball from over his shoulder but his first time shot whistled just wide of target.

Clach had a half-sniff of goal just before the half-time break. A stramash in the Academy box was not cleared an Paul Smith got a shot off that looked goal bound but Alex Lamb got a toe on it and turned it for a corner kick.

Macadie ended the half with another attempt that went just wide of target and that concluded the action for the first half with Academy going in with a well deserver 2 goal lead.

With 6 minutes of the second half played Clach pulled themselves right back into the game. Manson came out of the Academy box to chest down a high ball and referee Baxter awarded a free kick for a dubious looking hand ball. Morrison took the 22 yard free-kick and sent a rocket through the middle of the Academy wall which almost burst the back of the net. That goal was the 1,000 that Academy have conceded since joining the league in season 1994/95.

The home crowd's fears of Academy giving up another 2 goal lead for the second game on the trot were short lived as within a minute Academy restored their two goal lead. Weir played the ball to David Allan who raced down the wing before cutting the ball across goal and Macadie was on hand for a tap home.

Academy went further ahead in the 63rd minute. Macadie swung in a corner that went ping-pong on the box before it fell for David Allan and he found the net from 6 yards out for his 13th league goal of the season.

Blair Lawrie almost scored an OG but for a good save by keeper Kinnaird.

Clach won a free-kick 25 yards from goal in the 76th minute and Morrison once again got his strike on target but this time Bokas made a great diving save to tip the strikers attempt over the cross-bar.

Stevie Cunningham came on for Macadie in the 78th minute, and put the Scorries nap with his first touch of the ball. Mackay slid im the ball to the right hand side of the Clach penalty area and picked his spot with a crisp strike to leave Kinnaird no chance.

5 minutes from time Clach scored a further consolation goal. They won a corner that was floated into the Academy box and Colin Williamson came in unmarked to head home beyond an outstretched Bokas.

In the last action Clach substitute Andrew MacAskill had a good attempt from a free-kick, but Bokas was up to the challenge and made a fine stop.

The win is just the tonic for Academy and should give them a good confidence boost for Saturday's away trip to Forres for their HL Cup encounter. 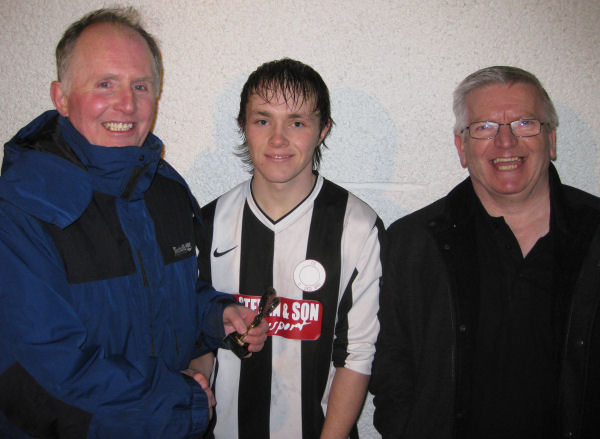