Written by John Briskham on 06 March 2010. Posted in Match Reports

The Harmsworth crowd were treated to a classic Cup tie today, with David Alan sending the Scorries through to the next round with the last kick of the ball. The game had everything; excitement, controversy, two red cards, a screamer of a free-kick and the inevitable last gasp winner.

Ritchie Tayor thought he was in on goal for Huntly a minute later but Gunn threw his body on the line with a great tackle to deny the striker a crack at goal.

Shearer was the next to try his hand in the 22nd minute when he had a long-range attempt but it flew straight into the arms of keeper Hastie.

Ritchie Taylor and Colin Robertson combined with 24 minutes of the tie played to give the visitors the opener. Robertson supplied the cross and Taylor ghosted in un-marked and nodded home past an out-stretched Bokas.

Academy should have levelled the tie 2 minutes later. Mackay provided a great ball into the Huntly box and Weir was millimetres from getting a toe on it to knock it into an empty net.

Hastie kept the visitors slender lead intact in the next Academy attack when he made a great save to tip a Macadie attempt over his cross-bar.

At the other end Bokas had a repeat save as he managed to get a hand to a Skinner header to turn the ball over his cross-bar.

Huntly went down to 10 men 9 minutes from the end of the first half. D Allan and Simon Scott had a tangle in the middle of the Huntly box and both fell over. Scott reacted and came down on Allan with his elbow and referee Sim gave the Huntly defender a straight red card. Allan also got booked for his part in the incident.

In 38 minutes Mackay drove up the left flank and squared for D Allan. He had a shot that went wide of the post, although the better option may have been to slip in Weir who was unmarked to his right.

Academy made their first change of the game with Shearer coming off for McKiddie.

2 minutes from half time Academy won a free kick 23 yards from goal which Ross took and he sent a daisy-cutter fizzing inches past the Huntly post.

The final action of the half saw a stramash in the Huntly box. Mackay swung in a corner which Ross challenged for. The ball bounced and seemed to come back off the head of Colin Robertson before flying into the arms of keeper Hastie.

Academy were first to challenge in the second half when Mackay had a shot from a corner. The ball flew through a ruck of players before Weir managed to get a flick on it but it went just wide of the target.

With almost an hour played Academy levelled the scores. Mackay won a free kick at the edge of the Huntly box. Stewart Ross took it and hammered a rocket-shot low along the ground and into the bottom left hand corner of the net.

Michael Ewen almost restored the lead for the visitors but Bokas was quick off his line and bravely smothered the ball at the feet of the striker.

The crowd thought that Academy took the lead in the 73rd minute. Mackay curled a free-kick over the top of the Huntly wall which went into the side-netting.

With full-time fast approaching Mackay had another attempt with a half-volley but it went just wide of the left hand post.

In the last action of the 90 Martin Gunn worked himself into trouble wide on the left wing and in an attempt to recover the ball lunged in on David Booth with a bad tackle and was correctly given a straight red card.

So into extra time. Both teams were by now running on reserves and Huntly went closest with two attempts in the first period of extra time. Substitute Kleczkowski had the first chance when he found an inch of space at the edge of the Academy box and got a shot off which whistled just wide of the right hand post.

Minutes later a high ball was punted into the Academy box and it went ping-pong in a desperate scramble before Stewart Ross eventually got his foot to it and he humped it clear of danger.

Both teams were now running out of steam, Michael Ewen in particular was more or less out of the game as he suffered from cramp. Academy won a free-kick in a great position but Ross Allan skied his attempt high of the target.

Huntly thought they had won the game in the next attack. Michael Ewen set the ball up for Russell Gould and he hammered his shot home, but as the players and travelling fans celebrated the linesman called the referee over and after some debate referee Sim awarded Academy a free kick for a push spotted in the box and the goal was chalked off.

So penalties on the cards, but for a last gasp winner. Bokas pumped a high kick down-field which bounced between the Huntly back-line. David Allan was on it in a flash and he demonstrated why he's currently one of the league's top goal scorers as he drove to the edge of the box and smashed a right foot shot past Hastie to send the Scorries into the last 16 of the Cup. The Harmsworth Park faithful went mental!

Academy now have an away trip to Forres in the next round on the 20th March. 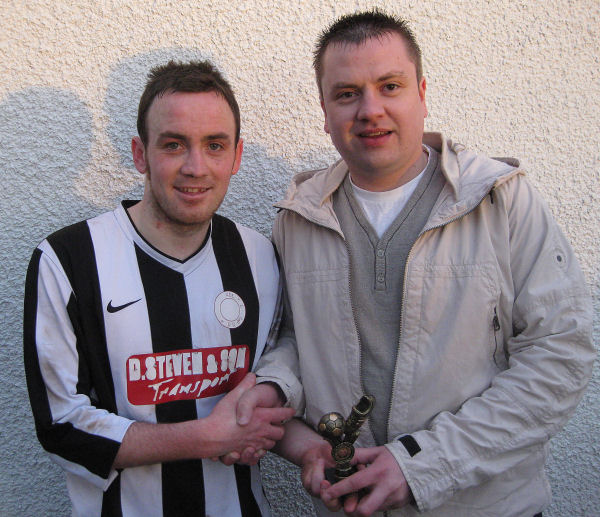