Written by John Briskham on 20 February 2010. Posted in Match Reports

This was the only SHFL game on the cards today with the weather wiping out all the rest. Academy welcomed new-comers Turriff United for their first visit to the Harmsworth and the Scorries ran out convincing winners hitting the new boys for 5. Turriff got a consolation goal in the last kick of the ball to deny the Scorries their 3rd consecutive clean sheet.

Five different Academy players got on the score-card today, and David Allan's goal in the 82nd minute was his 20th of the season in all competitions, and that puts him level with Clach's Gordon Morrison at the top of the overall goal scoring table.

Academy got off to the best possible start going a goal up in the 1st minute. Macadie played the ball to the feet of Mackay at the edge of the box. He scuffed his right foot shot put it slid just past keeper Buchan and went in off the base of the right hand post.

In the next attack Weir slipped the ball to David Allan and he wriggled into the box but Turriff defender Michael Ralton made a perfectly timed tackle to deny the Academy striker a crack at goal.

That was the first of three perfect defensive tackles on the spin for the Turriff defender Ralton as in the next attack he clipped the ball from the feet of Mackay as he shaped up for a crack.

Ross had a free header that he sent over the bar from an Academy corner, before Ralton made a carbon copy last tackle in the box to again deny Mackay a shot on goal.

Turriff's first attempt came on the quarter hour mark. Gary Harris slid in Grant Nobel but he blazed his attempt over the top.

In the 26th minute Turriff strung together some good football. Harris sent Robert Allan in on goal and he squared to David MacKenzie who had a shot from the edge of the box but Bokas was on hand to collect.

Academt went back up the park and had a good chance to increase the scoring when Macadie had a rifle of a shot deflected over the cross-bar for a corner. From the corner Weir headed straight to keeper Buchanan.

Academy doubled their lead on 31 minutes. Ross floated an inch perfect cross to the back post where Weir came in on the run and hammered the ball low into the bottom corner.

Academy should have had another 3 minutes later. Gunn clipped the ball down the right wing for Macadie who hit the bye-line before crossing for David Allan in the middle of the box but he headed high with a near empty net at his mercy.

David Allan was in the thick of most Academy attacks and went one-on-one with keeper Buchan in the 39th minute, but the Turriff keeper made a good block.

Academy went 3 up 5 minutes from the end of the first half. Manson floated a free-kick to the back post and Shearer stormed in unmarked to nod the ball home.

Turriff came out with fire in the belly for the start of the second half, and had a good 10 minute spell where they pressured the Academy defence.

David MacKenzie pounced on a miss-kick by Alan Farquhar but his attempt took a flick off the side of Stewart Ross and flew wide for a corner.

In their next attack Gary Harris flew down the right wing and crossed a dangerous ball right along the Academy goal line, but Grant Nobel just failed to get onto the end of it.

That was followed by Harris this time getting himself into a good shooting position but his attempt went straight to the arms of Bokas.

Academy then regained control of the game and Weir fired a first time attempt just over the Turriff cross-bar in the 58th munute.

David Allan was next to try his hand when he broke the off-side trap and from a wide angle tried to chip the out-rushing Buchanan but he put too much gas on it and the ball went wide of target.

Bokas did well on the hour mark when Grant Noble fired a 25 yard shot on target that took a nasty bounce off the turf but Bokas kept his focus and smothered the ball.

In the next attack Manson slid a free-kick into the box for Mackay and he got his attempt on target that keeper Buchanan must have seen late as the ball popped through the Turriff defence but he got down well to get a hand to it and turn it round his post.

At the other end Gary Harris broke through the Academy back-line and homed in on goal but Sinclair timed his tackle to perfection to nick the ball off his toes.

Substitute Cunningham was next to threaten goal when he beat the off-side trap and got his attempt on target that beat keeper Buchanan but Ralton screamed across and hammered the ball clear off the line.

David Allan put the game well beyond doubt for the Scorries in the 82nd minute. Cunningham played him in and Allan kept his cool and slotted home for his 20th goal of the season.

In the last minute Academy went nap. Shearer floated the ball over the Turriff back-line and Chris Craib couldn't reach it to clear the danger. That left Macadie clean through on goal and he made no mistake from 10 yards out.

Turriff played better in the second half and got a deserved consolation goal in injury time. Substitute Martin McLeod cut the ball back across goal and Craig Morrison caught the Academy defence napping and slammed the ball into the roof of the net from close range. 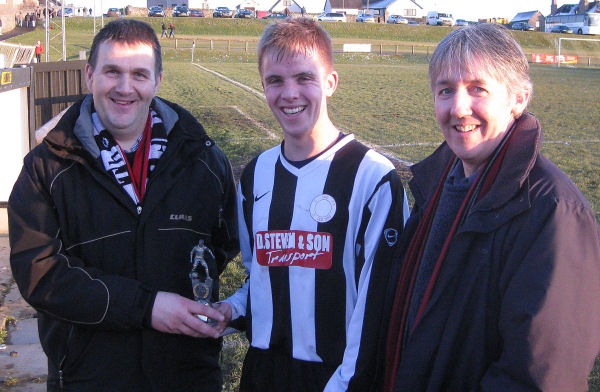