Written by John Briskham on 23 January 2010. Posted in Match Reports

Academy and Nairn shared the points today in a 0-0 draw. The last 0-0  in a competitive game witnessed at the Harmsworth Park was on the 16th September 2006 against Buckie Thistle in a SQ Cup game.

Alan Bokas was suspended for today's game following his sending off against Brora last weekend, and this gave James More his first taste of competitive football since last August, and he handled everything today that was thrown at him with ease. Sam Mackay was injured for today's game, so Alan Farquhar made the opening line-up.

midfielder Sam Mackay injured last week and Bryan McKiddie was on the bench.

The visitors started in determined fashion and in only the 5th minute worked the ball forward to Shaun Kerr who from 8 yards steered it towards goal where More dived to his left to make a confidence boosting first save.

Stevie Cunningham tried a lob from way out on the Academy right and Ridgers caught it easily at the back post. Richard Macadie burst down the left and his shot was deflected for a corner.

After 10 minutes, from Nairn's first corner up on their right, the ball was head flicked on by Martin MacDonald to Dale Gillespie whose first time volley from 18 yards bounced off Andrew MacLeod's chest.

In the 14th minute David Allan and Macadie fashioned Academy's best raid so far and when the ball broke to Gary Manson on the left he crossed to Craig Shearer whose downward header flicked the outside of Ridgers' right hand upright.

In the 18th minute James More's drop kick bounced over the Nairn defence with Allan in hot pursuit but Ridgers snatched it 15 yards off his line.

After the ball struck Stewart Ross on the arm out on the Nairn left, Steven Mackay drove the free kick towards the back post where More fisted it off the head of David Hinds for a corner. This was promptly cleared to the bottom end where Cunningham cut in along the 18 yard line past Ridgers who had dashed out to challenge him but four Nairn defenders had raced back and barred the way to goal.

In the 26th minute a low cross from the right by Alan Farquhar found Allan but his 10 yard drive deflected for a corner.

The big Nairn central defenders were dealing competently with any aerial attacks so Macadie steered the next Academy corner on the right low towards MacLeod. However Tony Low had spotted the ploy and intercepted the ball to start a swift counter raid.

Play was pretty much confined to midfield for a long spell until approaching half time Low whipped a cross from the right into the 6 yard box where Shaun Sinclair diverted it wide for a corner.

Up the slope after the break Allan raced forward, head over the ball and slipped a crisp pass to his right for Macadie whose return cross was deflected for a corner.

In the 50th minute Kerr looked certain to score when he ran behind the Wick defence and was one on one with More barely 12 yards from goal. The stocky Nairn striker drove the ball low towards the net but More dived smartly to his left to make an excellent save.

At the top end Cunningham drove the ball in low from the right and Ridgers smothered it at the near post.

The visitors were enjoying most of the possession. Low chipped the ball over from the right, More fisted it off Kerr's head and after a brief scramble near the 18 yard line Glenn Main sliced his effort wide.

Another skirmish following Gregg Main's corner from the left ended when Sinclair cleared the ball off the line.

Fraquhar did well to turn two defenders and pick out Cunningham whose low drive went across the face of goal and past the back post.

Academy battled on and when Farquhar was fouled in centre circle Ross hoisted the free kick into the goalmouth where MacDonald headed it out only to Macadie who shot wide from 25 yards.

Gary Weir came on, combining well with Manson on the left and dribbling the ball through the Nairn defence but there were still no incisive moves into the area. Lamb chipped another free kick to the penalty spot and Ridgers fisted it away from Shearer.

Midway through the half Gregg Main drove a 30 yard free kick into the Wick ‘wall' while efforts from Wayne Mackintosh and Mackay flew way off target.

Academy kept Nairn at bay and MacLeod's defensive work earned him the sponsors' Man of the Match award.

Allan broke clear and his low shot was well caught by Ridgers.

Ross bravely stopped a Low drive with his head.

Allan made a solo dart upfield, Weir and Manson again worked together to good effect and Allan swept the ball ahead of his brother Ross who had just come off the bench but the Nairn defence blocked the youngster's path.

Gillespie broke through for Nairn and More made the save of the game diving low to his left to prevent a certain goal.

Wick final half chance fell to Ross Allan whose 20 yard lob from the right beat Ridgers but dipped beyond the back post. 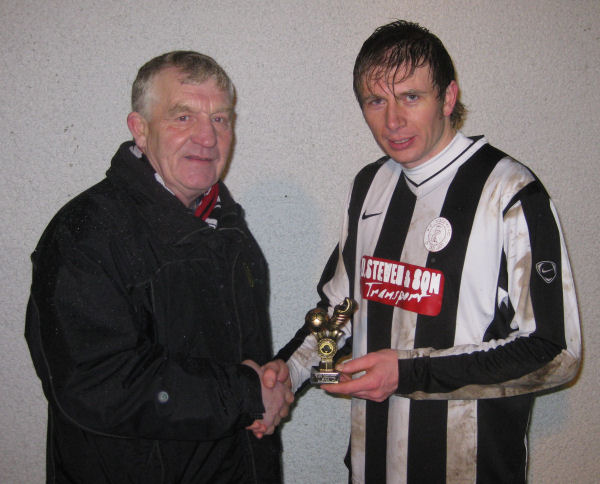