Written by John Briskham on 16 January 2010. Posted in Match Reports

A rip roaring game at Harmsworth Park as football at last came out of cold storage and ten man Academy won the eagerly awaited derby match with a battling second half performance.

A gale force wind made it difficult for both teams in the first half and chances were few and far between in a game punctuated by free kicks.

In the third minute Bryan McKiddie on the right slipped the ball short to Richard Macadie who swept it across to Gary Manson. Manson made ground up the left and crossed to near the penalty spot where Craig Shearer beat Brora keeper Daniel Bell to the ball but sent his looping header a yard wide of the left upright.

With six minutes played Manson played the ball down the left wing, Macadie fired it across goal and this time Bell succeeded in punching it away.

Brora came into the game but Stevie Cunningham chased back to stop Scott Begg's progress up the left and when Aaron Christie drove in a 30 yard free kick Sam Mackay blocked it on the 18 yard line.

In the 18th minute Manson took the ball 30 yards down the left and fired a shot low towards the far post where Bell dived full length to his left to touch it round the post for a corner. A spell of pressure followed Macadie's corner, Andrew MacLeod won the ball back when it was cleared to Davie Ross but the move ended with an offside flag.

Shearer started a good passing move in the 24th minute pushing the ball out to Shaun Sinclair on the half way line on the right. It went to Bryan McKiddie and through to Cunningham whose low cross was met first time by Mackay whose 10 yard volley flew inches over.

The Brora defence had to deal with a couple of long range free kicks from Stewart Ross and although the visitors looked dangerous on the break they seldom got sight of the Wick goal until on the half hour mark a 30 yard lob from Mark McKernie went just over the top corner of the goal as keeper Alan Bokas back pedalled to his right.

Wick went in front in the 37th minute. Begg crashed into Allan from behind and Ross launched another 40 yard free kick into the area. It was headed out and collected on the Wick left by Mackay who drove it back across the area and Allan directed a 10 yard glancing header into the corner of the net. Wick then had chances to extend their lead but Allan's shot was blocked by McKernie. Playing a 1-2 with McKiddie, Manson went to win a corner on the left but Shearer's header went wide.

However a couple of minutes before the break Gary Farquhar took a free kick out on the Brora left flighting it high to the back post where Davie Ross leapt high to head it down towards the goal line. Keeper Alan Bokas dived to his right and stuck out a hand just as John Cameron arrived on the scene. Cameron tumbled, Bokas was shown the red card, centre half Andrew MacLeod took over the keeper's yellow jersey and Mark Lamont calmly stepped up to take the spot kick. MacLeod dived to his right but had no chance as the ball nestled in the bottom corner of the net.

The first action of the second half saw Mackay tripped by Cameron 30 yards in front of goal. Macadie fired the free kick low past Bell's left hand post. In the 51st minute Allan was held back out near the left touchline and Mackay launched the 40 yard free kick high towards the back post. It swirled in the wind deceiving everybody to drop into the middle of the goal to restore Academy's lead.

As Brora pushed for an equaliser a Scott MacAngus free kick fell to Davie Ross who shot over the bar.

When Academy at last moved forward there was a lengthy phase of play up near the left corner flag where Manson eventually won a corner. It was cleared first to Mackay then to Stewart Ross who hoisted it 30 yards high to the back post where Bell jumped to make a good catch. Academy survived a series of corners and then broke forward, Allan finding the net only to be ruled offside.

Man of the Match MacLeod was playing confidently in his unaccustomed role and took every opportunity to use up time quite legitimately.

In the 72nd minute Mackay played a 1-2 with McKiddie in the Brora box but his shot was blocked.  At the bottom end former Academy midfielder Gary Farquhar fired a couple of efforts over the bar.

As time ticked away there were some heated midfield exchanges which brought bookings for Manson and Ross of Academy and Begg and McKernie of Brora.

Alex Lamb came on to bolster the Wick defence but immediately conceded a free kick. Farquhar's shot was blocked but came out to Christie whose effort was well saved by MacLeod who smothered it near the penalty spot.

The final action saw an exciting run from Gary Weir cutting in from the left to weave his way into box.

A game that had just about everything to warm the fans on a cold day, best of all three points to move Academy a couple of places up the table! 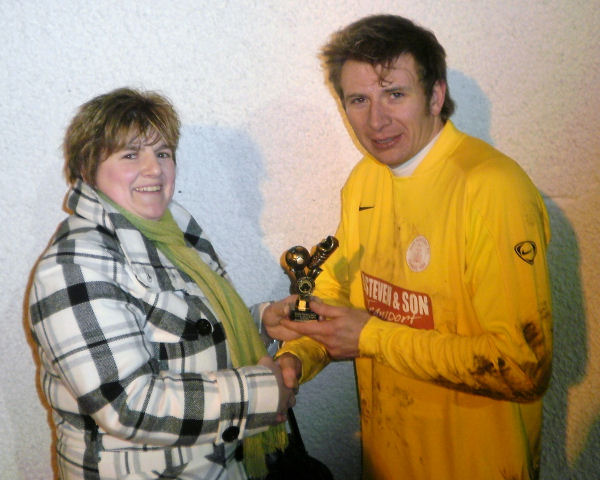