Written by John Briskham on 01 December 2007. Posted in Match Reports

Manager-less Huntly visited Wick today, and gave their caretaker managers Ian McKay and Mike Cormack a great result against a fine performance from the Scorries who just couldn't convert their chances.

Academy started the game in fine form and had their first chance in the 3rd minute. Good link-up play between Farquhar and Manson started the move, with Manson playing Macadie into the box but he fired his attempt just high of the target.

3 minutes later and Manson then showed some good skill up the right wing managing to keep the ball in play before crossing to Macadie at the back post. Macadie composed himself and rifled a shot on target that keeper Gray did well to turn around his post for a corner. Huntly failed to clear the resulting corner-kick and Alan Sinclair had a crack at goal from just outside the box that keeper Gray did well to save.

Huntly slowly came into the game and their first sniff at goal came in the 9th minute when Guild played a neat ball into the box for Maitland to run onto but More was sharp off his line and just beat him to the ball.

A minute later and More was called into action again, making a good save from a 28 yard drive from McGowan.

In a another good passing move Academy again threatened goal when Farquhar played Ross into the edge of the box but his shot went just high of goal from a tight angle.

Huntly passed up a good chance to take the lead in the 20th minute when McGowan showed some silky skills to play Maitland through the middle of the Academy defence, and with time to pick his spot he drove the ball straight at More who made a good reaction save.

2 minutes later and McGowan was again at the heart of another Huntly attack, getting a snap-shot on target that More saved.

Huntly took the lead on the half-hour mark when a McGowan shot took a lucky deflection off one of his own players, and with More moving to his right to make the save the ball flew past him into the opposite left hand corner of the net.

Academy responded with an almost perfect reply, going straight up-field from the re-start and Ross was unlucky not to score as keeper Gray got a hand to his shot to deflect the ball off the post and out for a corner.

A minute later and Ross again came close, this time his header was cleared off the line by Murray.

Academy's best chance of the half fell to Shearer in the 39th minute. He challenged keeper Gray for a high ball that Gray spilled. The Huntly defence called for a foul but referee Frew signalled play-on and the ball fell to Shearer with an open goal but his attempt was cleared off the line with a Huntly defender throwing his body at the ball to deflect it for a corner.

Huntly started the second half on the attack with McGowan unlucky not to score as he saw his shot from a wide angle hit Mores right hand post.

Huntly doubled their lead with 51 minutes played. McGowan did really well on the left wing turning the Academy defence before crossing the ball for Guild to head home from 8 yards out.

Cormie almost increased the lead 3 minutes later as he got the better of Shaun Sinclair but his attempt skimmed the top of the Academy cross-bar.

With just over an hour played Manson pulled Academy right back into the game. McKiddie sent Ross on a run up the wing and he sent a perfect cross into the Huntly box where Manson scored with a diving header.

Huntly scored their 3rd goal in the 71st minute. The Academy defence stood-off as Gray ran at them, and from 30 yards he has a shot at target that More seemed to have covered, but the ball took a weird bounce just in front of him and went over the top of his out-stretched hands.

Academy kept plugging away and McKiddie was sent clear in the box by Farquhar but pulled his shot just wide of target.

2 minutes later and Farquhar also sent a shot just wide of goal following a scramble in the Huntly defence.

With 5 minutes left Coghill came on for McKiddie and he almost made an immediate impact as he was sent through the middle of the Huntly defence but his shot went inches wide of Grays right hand post.

So plenty of chances for Academy today but the inability to stick the ball in the back of the net proved to be their main down-fall.  There were periods of the game today, particularly the first 20 minutes, where the passing and ball-control was first-class. Academy remain in 10th spot following today's results, and now have a difficult tie away to Keith next weekend. 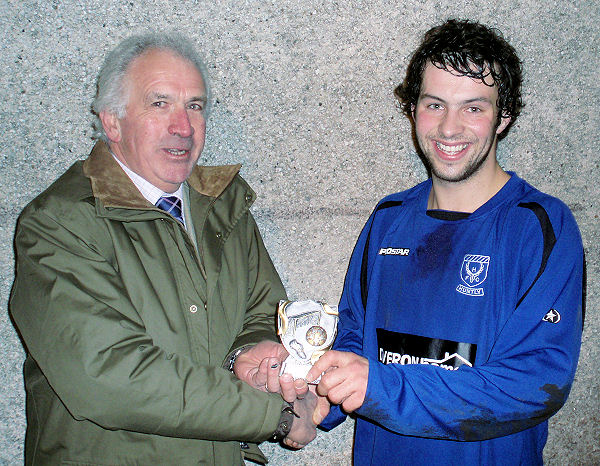