Written by John Briskham on 20 October 2007. Posted in Match Reports

Academy missed the chance today to move up a few places in the league after a disappointing defeat to Rothes. This was Rothes's first league win of the season, and ironically Academy's first home defeat.

The Scorries got the perfect start to the game, going a goal up in the 5th minute. Gary Weir cut open the Rothes defence with an inch perfect pass for Martin Gunn, who took his time and slotted past Mair from 8 yards out.

Rothes came straight back at the Academy and Stewart Ross did well to get a last ditch tackle on Hendry nicking the ball off his toes as he honed in on goal. Rothes equalised within a minute when Kevin Collins had a crack from 23 yards that beat an out-stretched More and went in off his left post.

In the 10th minute Shanks got a head-flick onto a crossed ball and it fell to Taylor who hit it on the half volley from the middle of the box, but he didn’t get much power on it and More made the save.

A minute later and Rothes took the lead. Another long range effort by Milne that More looked to have well covered at his left post, but the young keeper made an error of judgement as the ball seemed to bounce over his hand and ended up in the net.

Macadie fired a dangerous ball into the Rothes defence in the 18th minute, but defender Shortreed was first to the ball and he cleared it over his cross-bar.

With 27 minutes on the clock Milne tried a similar attempt from where he scored his first goal, but More got down well and got his body behind it.

A minute later and Hendry got the better of Alan Sinclair and from a wide angle got a shot in across goal that just whistled past Mores right hand post.

With 37 minutes played Academy started their best spell of the game. Shearer controlled a high ball in the middle of the Rothes and just as he was about to pull the trigger MacRea nicked it off his boot-laces.

2 minutes later Alan Sinclair and Macadie combined well on the wing before Macadie crossed to Shearer who set-up Gunn but he pulled his shot just wide of target.

Gunn ended the half with the final attempt, firing a cross goal shot that went just wide of the post.

Academy made a change at half-time with Davie Cowie coming on for Bryan McKiddie.

The first attempt of the second half came in the 52nd minute. Weir shooting over the top of the cross-bar from 16 yards out under pressure from Mark Adam.

In an attempt to try to change the game Gary Manson came on in the 59th minute for Gary Weir. Rothes made a change at the same time with Taylor being replaced for Ross Duncan.

Rothes had a great chance to extend their lead in the 63rd minute. Shaun Sinclair gave the ball away to substitute Ross Duncan, and he ran in on goal one-on-one with More. He tried to slot it past More but he did very well to get a foot to it to save a certain goal.

Rothes made another change with Kris Duncan coming on for Hendry.

2 minutes later and Shaun Sinclair gave the ball away again to Ross Duncan and this time Duncan shot just wide of target.

In the 71st minute David Cowie made a trade-mark break down the right wing and crossed to Martin Gunn who had a headed attempt that went wide of target.

2 minutes later and Rothes spurned another great chance, Shanks screwing his shot high and wide when he shout have at least hit the target.

With 75 minutes played Academy had their chance to level the game. Stewart Ross played a great ball onto the head of Gary Manson, and from the middle of the box Manson headed wide of target with keeper Mair rooted to the spot in the middle of his goal.

With 6 minutes left on the clock Alan Sinclair dallied on the ball and Milne took advantage and got in on goal but More narrowed the angle and he shot wide of target.

With time running out Ross Duncan did well on the wing and fired a cross into the Academy box for Kris Duncan but he headed wide of target from close range.

Just as Stewart Ross was announce as the match sponsors man of the match, he was sent off for taking down Kris Duncan at the edge of the box. Referee Watt adjudged that Ross was the last defender, so the red card was flashed. Collins blazed the resulting free-kick over the cross-bar.

The game ended with Rothes on the attack, first Ross Duncan shooting wide, and with 4 minutes of injury time played Kris Duncan had a shot from 8 yards out that More got finger-tips to and he turned it over the cross-bar.

So in truth a flat performance by Academy today and Rothes were worthy of their win. 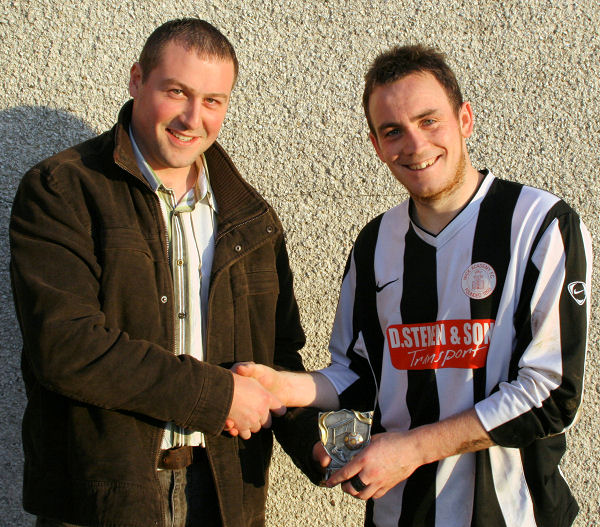