Written by John Briskham on 07 September 2019. Posted in Match Reports

Alan Farquhar was back in the starting line-up after his head-knock against Buckie Thistle, and both Danny Mackay and David Allan also returned from injury making the bench. Craig Gunn opened the scoring for Academy on a beautiful sunny day in the 4th minute when he stuck home a cross from Kuba Koziol. Jack Halliday secured all three points in the 67th minute for Academy’s first home league win of the campaign.
A delayed kick-off, and a 11-man defence could not stop Wick Academy helping themselves to three welcome points in Saturday’s Highland League match against Turriff United.
The Turriff bus suffered a break-down which meant a half-hour delay to the scheduled 3pm kick-off time at Harmsworth Park.
When the match finally started the visitors duly parked it inside their own penalty box.
Despite setting out their stall in such a fashion, it took the Scorries just four minutes to breach it. A ball over the top was latched onto by Kuba Koziol. The Pole bore in on goal and, while everyone was expecting him to have a go himself, he unselfishly squared the ball to Craig Gunn who slot-ted into an empty net.
Koziol once more raced off towards goal and this time decided to shoot on goal himself, only to drag his effort wide.
Turriff ’s Dylan Stuart was unlucky not to win a penalty when it appeared he had been clipped from behind by Alan Hughes.
The same player would later be denied when his shot from Robert Ward’s cut-back came back off a post.
At the other end, Richard Macadie must have thought he was about to stretch Wick’s lead when one-on-one with Fraser Hobday only for the Turriff keeper to pull off a great save.

After the interval, Gunn had the ball in the net again when Hobday spilled a shot from Hughes into his path only for the Wick forward to be pulled up for offside.
In fact, offside was the pre-vailing theme of the second half.
After 67 minutes Jack Halliday decided to take a more direct approach to securing victory. Picking up the ball mid-way inside Turriff ’s half, Halliday proceeded to surge towards goal. Although he got a lucky ricochet en route, Halliday was in no mood to argue as he forged on to slam the ball past Hobday.
Hughes saw a powerful effort from outside the box beaten away by the keeper.
Turriff finally came out from their shell to threaten Wick’s goal only for skipper Alan Farquhar to thwart Liam Norris by clearing his headed effort off the line.

Man of the match as chosen by match sponsor Global Energy Group was Jack Halliday. Jack is pictured receiving his trophy from Allan Mackenzie 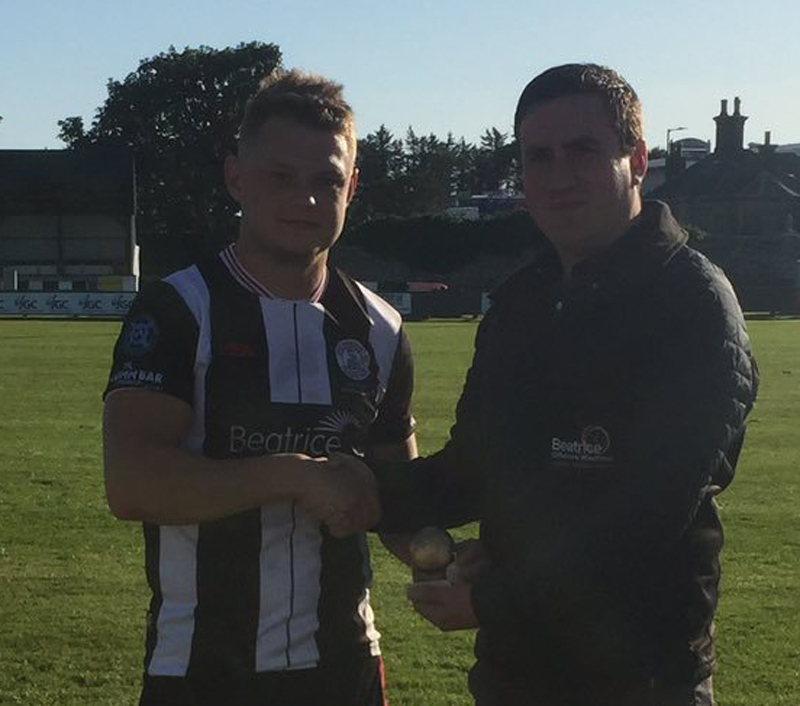