Written by John Briskham on 03 August 2019. Posted in Match Reports

Academy and Deveronvale shared the points today with a 2-2 draw at Harmsworth Park, with Vale snatching the equaliser in the last kick of injury time. Craig Gunn started the match in place of Davie Allan who pulled a hamstring in the mid-week North of Scotland Cup win over Invergordon.

The visitors opened the scoring after 7 minutes. Under no pressure Alan Farquhar played the ball back to Sean McCarthy but he sent a poor kick-out straight to the feet of Ross Archibald. He drove into the box and fired in a good strike that forced a great save from McCarthy but the loose ball fell to the unmarked Robert Scott who had the simplest of finishes from close range.

On 20 minutes Craig Gunn used his strength to burst through the Vale back-line to get onto the end of a Macadie pass but he appeared to lose his balance just as he pulled the trigger and the ball rolled wide of target.

MacNab was next to have a crack as he homed in on goal on the left but has shot was parried out by keeper Pennet.

Academy kept creating good chances and Macadie came close with another header from an Alan Hughes cross, but the ball again went just wide of target.

Academy drew level on 23 minutes with an early candidate for goal of the season. Sam Mackay unleashed an unstoppable shot off the outside of his boot just outside the left corner of the box and it flashed passed Vale keeper Grant Pennet and into the net.

Pennet was finding himself busy in the Vale goal this time making a save from a low shot driven in by Grant MacNab.

In the last action of the half Craig Gunn slotted the ball through to Alan Hughes but he was crowded out by a packed Vale defence.

2 minutes into the second half Academy took the lead. Richard Macadie played in Craig Gunn on the edge of the penalty area. He took a touch to control it, turned and then fired home past a rooted Pennet.

Up the other end of the park the lively Colin Charlesworth had a great attempt on goal that was saved brilliantly by the diving McCarthy.

Academy were now controlling the game with Sam Mackay running the show in the middle of the park.

Grant MacNab played Alan Hughes through the middle of the Vale defence and just as Hughes was about to pull the trigger a covering Vale defender slid in and got a foot to the ball knocking it for a corner.

A third goal looked certain for Academy but Craig Gunn’s effort was bundled off the line by a back-tracking Vale defender.

Vale went down to 10 men on 90 minutes when Ross Aitken picked up his second booking of the match.

So the points looked safe for Academy, but Vale had other ideas. A long ball up-field was headed on by Colin Charlesworth which he ran onto. Sean McCarthy came out of his goal to try to clear it, but Charlesworth dinked it past him, kept his composure and from a tight angle fired the ball into the empty net passed an outstretched Grant Steven for a last kick of the ball smash and grab.

Sam Mackay was awarded the man of the match by our sponsor the Buttress family. Sam is pictured receiving the “Torn Loyalty” trophy from Gavin Robertson. 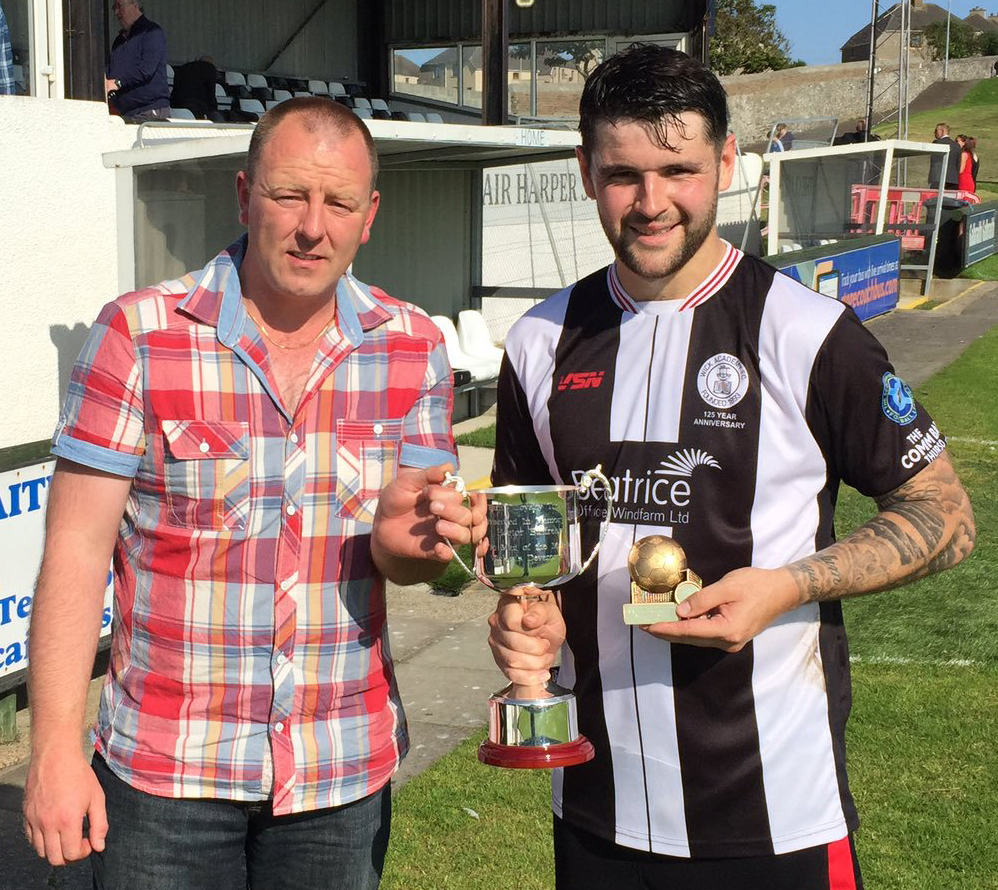