Written by John Briskham on 02 September 2010. Posted in Players

New Signing for The Scorries

Shane is an exciting young talent who can play on the left or right side of midfield; he is a very skilful and pacy player with an eye for a goal. The 23yr old midfielder has previous experience in the SHFL with Brora Rangers prior to leaving them for Golspie Sutherland FC.

Shane will be available for selection for tomorrow's SHFL Home fixture against Lossiemouth FC, but is Cup tied for the NOS Cup final on the 11th September.

"The club is absolutely delighted to secure Shane's signature. I believe their was interest from a couple of other SHFL Clubs, however we are delighted he chose Wick Academy Football Club to display his football ability.

Shane is a player that our Management Team (Titch & Zeeky) have been very interested in and once they intimated to the Club they were very keen on getting him onboard; we as a club were only too delighted to support them in their quest to build on an already talented squad.

I would like to take this opportunity to thank Golspie Sutherland Football Club for making the signing of Shane possible, they were absolutely tremendous to deal with and we as a club wish them all the best for the rest of their Season".

Shane is pictured below at the Harmsworth Park tonight with Wick Academy General Manager Pat Miller and Secretary Alan Farquhar. 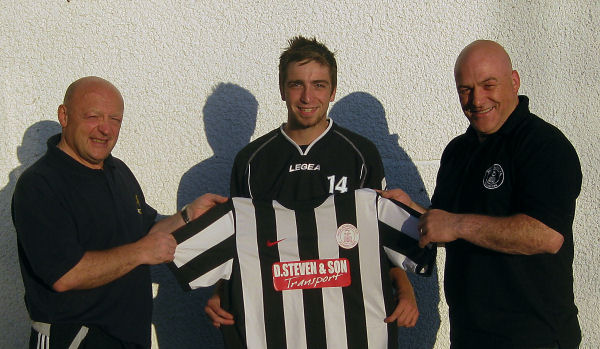