Written by John Briskham on 13 August 2010. Posted in Players 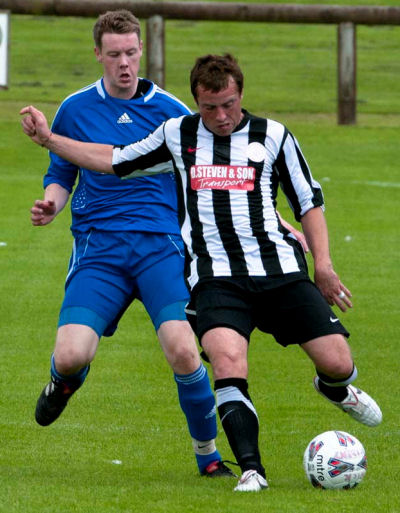 Club captain Martin Gunn became the first player in the Club's history to make 300 league starts on Saturday the 7th of August in Academy's home game against Strathspey Thistle. Martin has also featured 22 times for the Scorries in the league coming on as a substitute His appearance record in Cup competitions is also impressive, featuring in a total of 70 Cup ties for Academy. Martin is now in his 16th season with Academy and celebrated his testimonial season in 2006/07.

Messrs MacDonald and Miller took joint charge of the Academy team for their first Highland League season in 1994/95 and invited Martin along to training. He made his debut in the League Cup tie at home to Fort William on August 20 though the team lost 4-1.

His league debut the following Saturday at Peterhead was a 4-0 defeat but there were promising signs as Academy came within inches of an equaliser in the 75th minute before tiring late on. A week later Martin was wearing the number 8 shirt as Alan Murray scored to earn a 1-1 draw with Rothes and the club's first ever Highland League point.

Martin scored his first Academy goal on December 10, 1995 at Buckie, and since then he has hit the net 75 times in league and cup ties. hopefully there are a few more goals in him yet before he hangs up his boots.

Wick Academy co-manager Richard Hughes was delighted that Martin had reached this milestone in his playing career and said "Martin has been a fine player and a great servant to the club. The players and coaches are all pleased for him to reach this milestone of 300 games. Having been captain for a lot of years Shoe really deserves for us to win something this season".