Wick Academy welcomed first-footers Fort William for the first game of the new decade. It was Russell MacMorran’s last game in charge since he announced a few weeks ago that he was standing down as Manager.

The game had two significant milestones with Gary Manson scoring his 50th competitive goal in his 659th appearance, and Richard Macadie scored his 200th goal in his 550th appearance.

Two goals in the first three minutes from David Allan and Richard Macadie got Academy off to a flying start, but Harry Nicolson pulled one back on the quarter hour.

Gary Manson converted from the penalty spot on 57 minutes and Macadie scored his second of the match in the 77th minute to put the result beyond any doubt.

Davie Allan started and finished the move that saw Academy open the scoring after two minutes. He embarked on a determined run to the edge of the box before playing the ball out to Jonah Martens on the left. Martens sent it back into the penalty area and it fell nicely for Allan, who despatched a well-placed shot into the corner of the net.

A minute later Academy struck again. Alan Hughes on the right breezed past his marker and fired in a high cross that was flicked on by a Fort defender. It fell to Macadie in the middle of the box. He took a touch to control it then fired home a right foot drive past the diving Mateusz Kulbacki.

Fort pulled one back on 16 minutes after forcing two corners in quick succession. Gunn’s delivery was nodded in at close range by Harry Nicolson.

Ryan Campbell let fly from distance after Hughes again did well to beat his man on the wing before cutting into the box. He set up Campbell who forced a finger-tip save from Kulbacki with his left foot shot, but Fort were carving out chances of their own at the other end.

There was a more purposeful look about Academy after the break and they earned a penalty after 57 minutes when Allan was bundled over after getting on the end of a long ball sent down-field by McCarthy. Manson sent Kulbacki the wrong way from the spot and he rolled it into the corner of the net.

Academy completed the scoring after 77 minutes. The tireless Allan created space on the right before crossing to Macadie, who produced a typically classy finish hitting the ball first-time to send it high into the net. It was a worthy way for the club’s record scorer to reach the 200 mark.

Man of the match as chosen by match sponsor Mackays Hotel and Bin Ends was David Allan. David is pictured receiving his trophy from Jen Lamont, Pamela Bremner and Freya Lamb 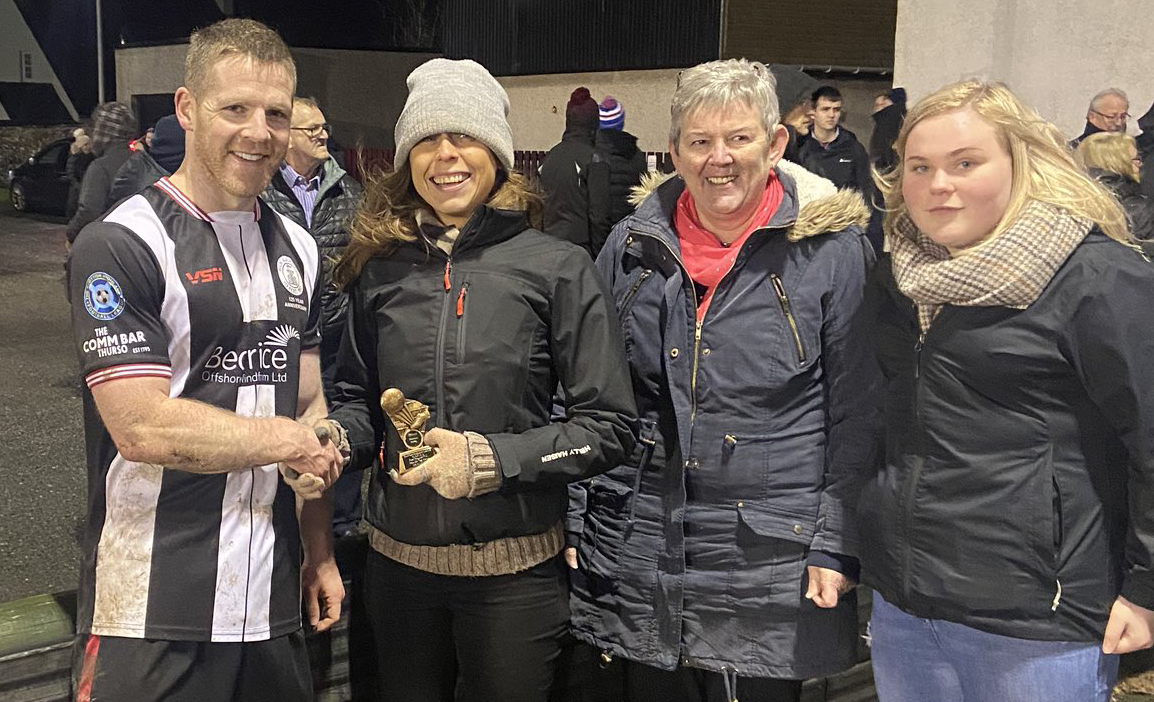