Academy looked as if they were going to put the disappointing mid-week defeat in the North of Scotland Cup behind them when Richard Macadie got them off to a great start within 5 minutes. Buckie however fought back and goals from Andrew MacAskill and substitute Scott Graham were enough to see them earn all three points.

Academy’s opening goal in the 5th minute came from good play starting from Craig Gunn who set Alan Hughes on his way down the right flank. He drove into the Buckie box, skinned Shaun Carroll and got a shot on target that was blocked and fumbled by keeper Bell. The re-bound fell to Richard Macadie and although his effort on goal looked to be cleared by Kieran Adams referee Mat Northcroft was happy that the ball had crossed the line and he awarded the goal.

The visitors went level on 24 minutes when they broke on the counter-attack. Sam Robertson fed the ball to Andy MacAskill on the right. He drove into the penalty area and slipped a low driven shot past Sean McCarthy and into the corner of the net.

Into the second half and Academy came within inches of re-taking the lead. Craig Gunn floated in a free-kick that evaded everyone in the box before flicking off the far post.

Alan Farquhar took a bad head knock on 32 minutes with the claret being spilt on the Harmsworth Pitch and he was replaced by Gordon MacNab, with Sam Mackay falling back to fill Farquhar’s defensive berth.

MacNab was straight into the action delivering a free-kick into the box that Craig Gunn latched onto but his effort on goal was saved by Bell.

Alan Hughes was next to try his hand but he sliced a good opportunity wide of the target.

Buckie hit the post when a Scott Adams shot deflected off Sam Mackay, before substitute Scott Graham grabbed the winning goal sending a looping header over McCarthy and into the net.

Sam Robertson almost increased the Jag’s lead but his curling shot smacked off the bar. Kevin Fraser followed it up but McCarthy pulled off an excellent save to deny him.

Academy almost grabbed a late equaliser. Sam Mackay delivered a perfect free-kick into the box which fell to the feet of Grant Steven but he side-footed his effort over the bar from close range.

Graham looked dangerous and in the last real action of the game he forced McCarthy into a good save.

Man of the match as chosen by match sponsor JGC Engineering Ltd was Richard Macadie. Richard is pictured receiving his award from Colin Mackenzie 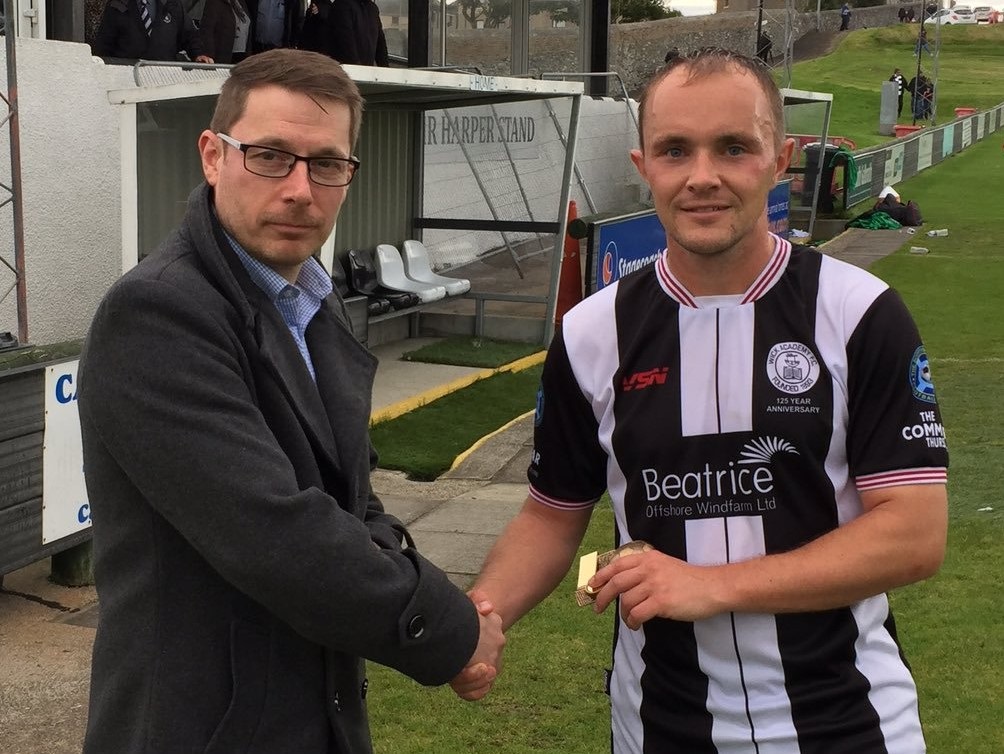